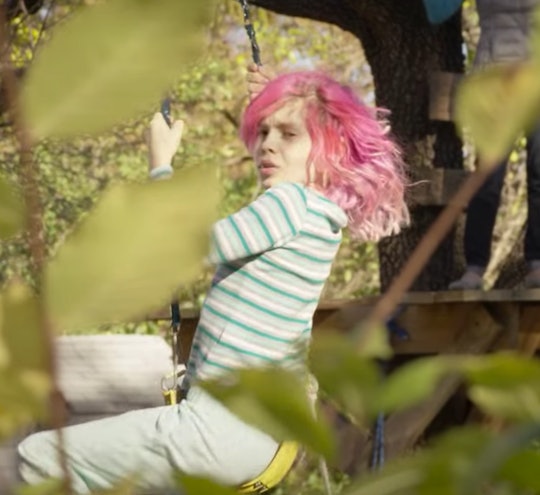 Featured on the front of the subscribers' edition of the upcoming National Geographic special issue is a girl, decked out in pink: pink peace sign stretch pants, pink t-shirt, pink shoulder-length hair. And beneath the portrait of 9-year-old Avery Jackson is a quote that encapsulates her relationship to her gender. "The best part about being a girl is, now I don't have to pretend to be a boy," Avery, the first transgender girl to grace the cover of National Geographic, told the magazine, as part of its "Gender Revolution" issue. Avery's story is one of a tapestry of experiences with gender that spans more than 100 children and teens around the globe and makes up the Nat Geo foray into gender, which is at once a closely held tenet of each person's identity as well as, at times, a political flashpoint.

"Youths are articulate and smart and key observers, and they don't have a social veil," National Geographic editor-in-chief Susan Goldberg told NBC Out. "They'll tell you what they think, and that is a true reflection of how societies really are. It's harder to get more candid responses out of adults. We wanted to understand how gender plays out in society, and what are the limits, or lack of limits, they think they have because of their gender."

The result is a celebration and an exploration of young people all over the gender spectrum, with a group photo adorning the cover of the edition of the magazine that will appear on newsstands Dec. 27.

Issues related to the rights and protections of transgender individuals thrust gender identity into the mainstream national spotlight for perhaps the first time this year, as politicians debated legislation like North Carolina's "bathroom bill" meant to confine people to the public accommodations that correspond with their anatomies rather than what's in their hearts and minds. At the same time, activism and trans visibility took off, so that gender nonconforming children and adults could see themselves in peers like Nicole Maines and Jazz Jennings, as well as high-profile celebrities like Laverne Cox and Caitlyn Jenner.

But Jenner's very public transition (as well as her own iconic Vanity Fair cover) is far from emblematic of the experiences of nonfamous individuals of a similar gender identity, and the National Geographic issue aims to fill the void in the "understanding [of] real people and the issues we face every day in classrooms or workplaces in regards to gender," as Goldberg said, according to NBC, as well as "explore gender as a spectrum."

But it's not just transgender issues that will captivate National Geographic readers when they crack open the "Gender Revolution" issue. While one cover is devoted to Avery, the other points out the gender identities of each of the young people gathered there: intersex nonbinary, transgender female, bi-gender, transgender male, androgynous, and male. Both editions of the magazine will feature the same content inside. And the articles that make up that coverage will dive into traditional gender roles as well as perspectives from people who don't identify with them.

A sneak peak article posted online ahead of the full issue's publication is called "How Today's Toys Are Harming Your Daughter's Brain," and explores the effects on children of separating toys for boys and girls. According to The Huffington Post, a piece entitled "Dangerous Lives of Girls," will feature those in Sierra Leone.

As many who don't fit neatly into the gender binary of "male" and "female" have been telling us for a while, gender is diverse, not a rigid prescription. National Geographic's exploration into the many facets of gender and what it means will help to reveal that fact to an even wider audience, which is positive progress.