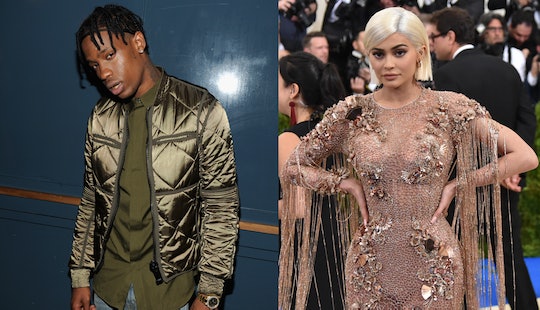 I honestly doubted it was ever going to happen. I'm not proud of myself, but there it is. I know Kylie Jenner didn't, like, owe any of us a pregnancy announcement and she totally is allowed to keep it private right up until her baby was born. I respect that, totally, woman to woman. But with the news that she finally gave birth, I just want to say we all have license to scream. And Travis Scott's response to Kylie Jenner's baby is historic, as in, this baby is the ultimate meta-rap.

Fans have been waiting since the end of September for the Life of Kylie star to confirm the rampant pregnancy rumors. It was initially reported by several news outlet that Kylie was around four months pregnant at the time. Us Weekly also reported that her boyfriend, "Butterfly Effect" rapper Travis Scott, was already telling friends that the couple was expecting a baby girl. Since then, it's been a whole lot of smoke and mirrors.

Prior to the Super Bowl on February 4, the news came down the pipe (Kylie Jenner's Instagram) that she had been safely delivered of a baby, as we used to say in olden times. Shortly afterward, Scott tweeted, "2.1.18 4 ever New rager in town. !!!" and then, shortly afterward, "May I supply the rage on this next album. My conscience is on fright night at six flags." In rap speak, this is one excited dad.

Both Travis and Kylie have been fiercely private about their relationship, which reportedly began in April, just months after Kylie broke up with longtime boyfriend, rapper Tyga. A source close to the couple told People that Kylie has been enjoying some serious nesting:

She doesn’t want to be photographed. At the moment, she wants more privacy. She has family and friends come to her house instead so she has company. She’s very excited about the baby, though. She talks about the baby nonstop.

It seems Travis is just as excited to welcome his first child as Kylie; a source told Us Weekly that the rapper is by her side whenever he's not on tour:

They’re extremely sweet and very, very happy. They’re doting and kind with each other. It’s cool to see.

Expectations were high among KarJenner fans after Kylie's older sister Khloé shared her pregnancy news with the world on Dec. 20 with a gorgeous Instagram post. The post featured a black-and-white shot of Khloé and NBA player boyfriend Tristan Thompson's hands resting on her pregnant belly.

My love, Thank you for allowing be to be apart of your journey and entering your life that day at the bel air hotel. One of the best moments in my life. I'm soo happy to be on this journey together with you and creating this angel from the man above. Everyday I give thanks to him for bring us together. I love you soo much and I know our little angel feels the love we share together and will know that mommy and daddy loves them unconditional forever and ever amen. Btw, shoutout the brodie @brandonjennings for bringing this King and Queen together. Love my G

Despite all the rumors that swirl around the internet, all the assumptions made about the KarJenners and their love lives, it looks like everything's coming up roses for these two sisters and their partners. And honestly? Couldn't be happier for them.