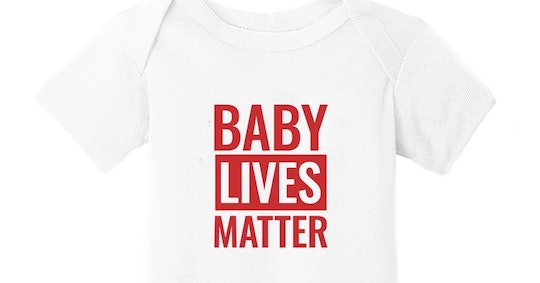 Across the country people are rising up to take a stand against systemic racism and police brutality. The Black Lives Matter movement has perhaps never been more visible and apparently President Donald Trump's campaign thought it would be a good idea to try to capitalize on it. Indeed, Trump's campaign website is selling "Baby Lives Matter" onesies with nearly identical branding to the Black Lives Matter movement and people have wasted no time in expressing their outrage.

Though it's apparently been on the site for a while, some recently noticed that Trump's presidential campaign website is selling a white onesie with the words "Baby Lives Matter" printed across the front in a font that looks exactly like the slogan for Black Lives Matter for $18. "Proudly show you’re investing in your baby’s future to Make America Great Again with this incredibly soft, boutique-style one-piece," the "limited edition" product's description reads.

Romper's request for comment from Trump's campaign was not immediately returned, but a spokesperson told CNN that the onesies have been sold as part of the anti-choice March For Life campaign, which took place in January, but they remain for sale on the website as Black Lives Matter protests continue to spread across the country. President Trump has continued to criticize largely peaceful protests in support of Black Lives Matter in places like Seattle where he tweeted that protesters were "anarchists" and "terrorists" who "burn and pillage our cities."

How similar is the slogan? Have a look at Politico reporter Alex Thompson's side-by-side comparison.

Folks on Twitter quickly criticized the item as a disrespectful move towards Black Lives Matter, a phrase he has never said publicly. "That is completely beside the point. It undermines the whole issue. Trump is so uncouth," one person tweeted about the onesies. Another simply said, "This is a new low for Trump."

Others highlighted the Trump administration's treatment of immigrant families that led to children being kept in cages in detention centers last summer. "This speaks volumes!!! Not only is it a blatant attempt to diminish the movement, it is a statement of their view that only Anglo babies lives matter. Babies of color can live in cages & be separated from their parents," another person tweeted.

"The hypocrisy baby lives matters when this circus of administration has babies in cages and away from their parents," another wrote on Twitter.

As President Trump continues to take a hard line against people protesting systemic racism, asking state governors to "dominate the streets" in a recent conference call, as Rolling Stone reported, the overall consensus appears to be that co-opting the Black Lives Matter slogan for a "limited edition" anti-choice onesie is ill-advised.