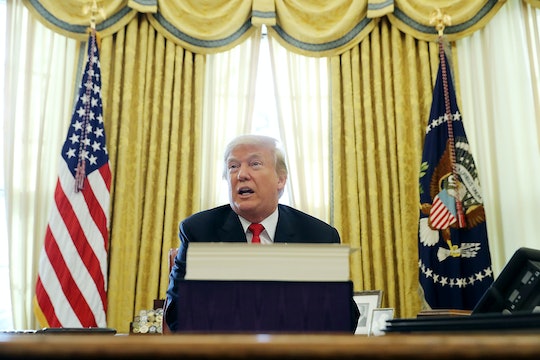 The start of a new year is usually a time of hope and optimism for the months ahead, and given that 2017 turned out to be such a disappointing year for so many, it doesn't seem like it would take much for 2018 to be an improvement. But on Tuesday night — only two days into 2018 — President Donald Trump tweeted out a message that seemed to suggest we shouldn't exactly get our hopes up. In his latest social media attack on North Korea, Trump compared the size of his nuclear button to Kim Jong Un's, and yes, it's exactly as unsettling as it sounds.

Trump's tweet came in response to a New Year's Day speech given by the North Korean leader, in which he claimed the country had "achieved the goal of completing [its] state nuclear force in 2017," and that that "the US should know that the button for nuclear weapons is on [his] desk," according to The Guardian. Given that it certainly isn't the first time that Trump has used Twitter to mock the leader of the totalitarian regime, it isn't surprising that the president chose to hit back, but his message was one that has led to widespread outrage — not to mention ridicule. In the post, Trump wrote that he also had a nuclear button, before claiming that his is "much bigger [and] more powerful," and that unlike Kim's, "my Button works!"

Unsurprisingly, Trump's message led to an almost instantaneous slew of tweets making fun of the president's preoccupation with, well, the size of his button:

But, even as many were snickering, Twitter was also majorly concerned:

Some made a point to remind Americans not to let their guards down:

While others noted that, regardless of the outrageousness of the tweet itself, this is actual nuclear war he is discussing:

As scary as it certainly is to think about both Donald Trump and Kim Jong Un with nuclear buttons on their desks though, The New York Times noted that, at least in the United States, there isn't actually a literal "nuclear button." Instead, the president has what's called a "nuclear football," a 45-pound briefcase carried by a military aide and which contains "an instructional guide to carrying out a strike, a list of targets, a radio transceiver and code authenticators." The New York Times also noted that in order to carry out a nuclear attack, the president would have to provide a code that would confirm his identity — but given that there is no further approval needed at that point, if Trump were to opt to authorize a nuclear strike, it would happen quite quickly.

Button or no button though, Trump's tendency for making decisions without first consulting others, and the fact that he doesn't seem to have any issue advancing policies that are actually highly unpopular is what makes this scenario particularly scary. Not only is it entirely fathomable that he may actually decide to use his "much bigger [and] more powerful" nuclear button, but if he did, there wouldn't be anything stopping him. And that would definitely be disastrous.

In addition to the obvious deadly impact of the nuclear strike itself, experts expect a war between the United States and North Korea would also "trigger a global climate catastrophe," according to Mashable. Scientists estimate the planet would cool by up to about 18 degrees Fahrenheit, and the sun would basically be completely blocked out by all the smoke sent into the upper atmosphere. Crops and animals would die out — leading to food shortages — and some models have predicted that, even in summer, temperatures could stay below freezing worldwide.

In other words, Trump's taunting tweets are a big deal — even if they seem eye-rollingly ridiculous. And while it might be easy to assume that he couldn't possibly be serious about following through on his nuclear weapon taunts, the reality is that it is totally possible. There's no need to give up hope on 2018 just yet, of course, but if nothing else, Trump's North Korea tweet is a reminder of what might be to come.

More Like This
'Operation Fly Formula' Begins With 78,000 Pounds Of Baby Formula
Lawmakers Passed Two Bills To Address The Baby Formula Shortage
New Dad Pete Buttigieg Shares Family’s Struggle To Find Baby Formula
Two Young Children Have Been Hospitalized Because Their Formula Is Out Of Stock