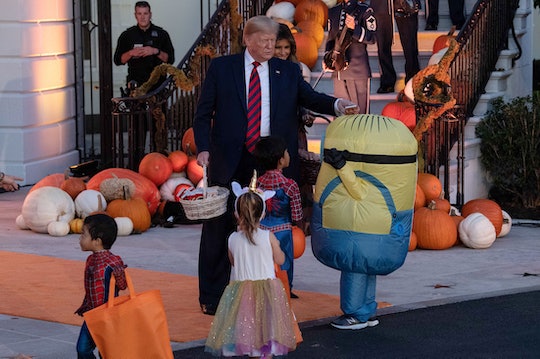 Trump Put A Candy Bar On A Trick-Or-Treater's Head. Yes, I Too Am Confused.

One of the most adorable traditions at the White House is the annual trick-or-treat event hosted by the President and First Lady each year. Even if the current leader of the country isn't necessarily to your taste, who can possibly say a bad word about a group of adorable children lining up to get candy on a beautiful fall day? Well, I'm not saying a bad word about this year's experience, but let's just say it was an interesting thing to watch. Especially when President Donald Trump put Halloween candy on a trick-or-treater's head for some odd, unknown reason. Yes, like you, I am also very confused.

On Monday, Oct. 28, President Trump and First Lady Melania Trump were on hand to host the White House's annual Halloween festivities. This is the third year the couple has handed out candy to trick-or-treaters on the grounds of the White House so you think they might be pretty good at it by now, right? Also they are both parents, so one might assume that they were familiar with the concept of trick-or-treating even before hosting kids at the White House. It's a pretty simple exchange, after all; kids wear fun costumes and say "trick-or-treat" and then you just smile and put candy in their bag or bucket or whatever. It's not terribly difficult. Well, for most people, that is.

The Trumps had Twitter collectively scratching their heads after video surfaced of one particular exchange with a kid dressed in a Minion costume. The child approached the Trumps with their bag out and ready to be filled with candy when the POTUS instead placed a chocolate bar on the child's head. Seeing her husband do this, Melania promptly followed suit. The candy fell off the poor little Minion's head, so I guess they were going for more of a trick than a treat.

Although the kid shouldn't be too heartbroken about it; word on the street is that the Trumps decided to give out Hershey bars, which were ranked as #10 on a very important poll ranking the best Halloween candy. Yes, they appeared to be king-sized candy bars instead of fun-sized but still — they're no Reese's peanut butter cups, which were ranked as the most popular Halloween candy in America, according to USA Today, because obviously.

It looks like President Trump got two things wrong this Halloween, and it's no big surprise that people are roasting him for his trick-or-treat faux pas on Twitter.

I know it's not fair to compare President Trump's awkward moment of putting candy on a kid's head instead of in their bag to President Obama's smooth Halloween hits, but I can't help it. I think Obama looked forward to Halloween every year so he could hang out with kids, singing "Purple Rain" to a pint-sized Prince and pretending to collapse after a high five from a tiny Superman.

Most important, though, he always managed to get the candy in the actual bag. Oh how I miss him.