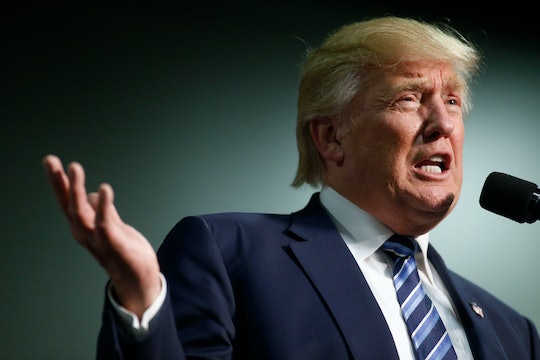 At a New Hampshire rally on Saturday, Donald Trump suggested drug tests before next debate because he doesn't know "what's going on" with Democratic nominee Hillary Clinton. He told supporters that at the last debate, Clinton was all "pumped up" but that by the end she was very tired and couldn't "make it to her car." Trump supporters seemed to like the idea and he said that he would be willing to take one as well.

He added that athletes have to take drug tests and so should the two candidates. Maybe that's Trump's problem — that he thinks this is a game or some athletic contest between him and his opponent. It's not. It's a political debate voters watch to hear about policy. But that's obviously not where Trump wants to take this discussion.

He wasn't specific about why he thinks they should be drug tested, but the mere thought that Clinton should be screened sounds like a veiled accusation that she's on drugs. At this point, he might also suggest an obstacle course or rope climbing to prove who would be a better president.

Trump sounds stressed, really. And who wouldn't be after the week he's had? At the rally on Saturday, Trump was again on the defensive about recent allegations from eight women that he sexually assaulted them in the past. He also spoke at length about how the election is "rigged." The drug test comment could also just be an attempt to redirect voters' attention from his own scandals and policy.

Trump's attacks are personal. At the end of the last debate, he said that Clinton had "hate" in her heart. He's also questioned her stamina and health throughout the campaign, as well as saying that the election and debate process is rigged against him. Implying that Clinton is on drugs is, apparently, a way for his campaign to prove that. The comment also might be a hint about where he might go during the last presidential debate next week in Las Vegas. The topics of the debate, which will be moderated by Fox News' Chris Wallace, include the Supreme Court, "hotspots" for terrorism, immigration, and also "fitness to be president."

It doesn't really matter who you support, the suggestion of a drug test is a good way to get some jabs in about "fitness" to lead on the debate stage. Trump does know how to set the stage for a fight. Since it will be an actual debate topic, though, the physical and mental health of both candidates seems to be an important issues for voters. Accusations of drug use might be a little out there, though.

The drug test offer seems more like a way to attack Clinton and take attention away from the ongoing reports of sexual assault against the candidate than an actual proposition. And the Trump campaign should take note: the more Trump jabs at Clinton and goes on the attack, the more it starts to sound like he might be mentally unfit for the Oval Office gig. If anything, the next debate is going to be an eventful one, for sure.