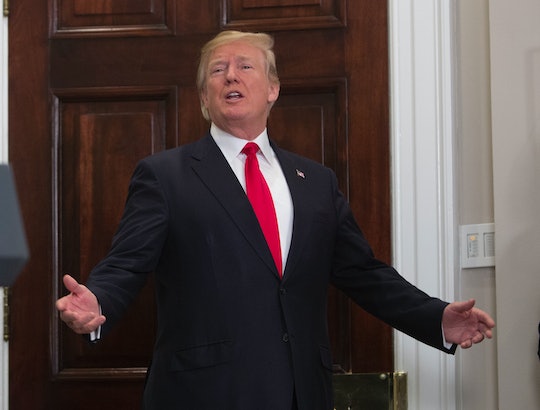 On Sunday, President Donald Trump's sit-down interview with Piers Morgan aired in the U.K., and during the interview Morgan asked the president — presumably just in case anyone actually had any doubt about this — if he considered himself a feminist. Unsurprisingly, Trump said that he was not, and told Morgan that calling himself a feminist "would be, maybe, going too far," according to The Independent, before saying, "I'm for women, I'm for men, I'm for everyone." But honestly? Given Trump's quotes on feminism in the past, it probably would have seemed even more outrageous if he'd actually tried to claim that he was in fact a feminist. Because while it may be the first time he's ever been asked the question point-blank, he's definitely already offered up plenty of proof that gender equality isn't something he stands behind.

Judging by Trump's response to Morgan's question it seems that he assumes (like many others who malign the notion of feminism) that calling yourself a feminist means that you are inherently anti-men. That's completely wrong, of course — it's just about wanting equal rights for both women and men — and there are, in fact, other world leaders who could probably teach Trump a thing or two about being a male feminist (oh hey, Canadian Prime Minister Justin Trudeau). But even if he had understood the definition, he's already said so many things that undercut the progress feminists have long been fighting for, that it still seems reasonable to think his answer would have remained the same.

It seems actually pretty laughable to consider asking Trump about his views on feminism given the way he actually talks about women as being little more than beautiful objects whose value only exists in terms of their sexuality. But just in case there was any doubt, he made his feelings pretty clear on the now-infamous Access Hollywood tapes recorded in 2005, when, according to Marie Claire, he said,

The Time He "Broke The Glass Ceiling"

For argument's sake, though, let's put his p*ssy-grabbing comment on hold temporarily and look at the ways he views other feminist issues — like, let's say, equality in the workplace. Women in American (and all over the world) face a gender pay gap, and are paid a fraction of what men are paid for doing the same work (although as usual, white women fare better here for the most part compared to women of color).

Once again, it's not exactly clear if the president knows what feminists are actually talking about when they discuss the "glass ceiling" that limits their advancement (particularly for marginalized women), but after Hillary Clinton became the first woman to clinch a major-party presidential nomination in 2016, according to Politico, Trump swooped in to claim he'd actually done more for feminism than she had. He told Fox News’ Bill O’Reilly,

Number one, I have great respect for women. I was the one that really broke the glass ceiling on behalf of women, more than anybody in the construction industry.

When Hillary Played "The Woman Card"

Unsure how a man feels about feminism? Ask him his thoughts on the "woman card." The implication behind the degrading phrase is the myth that women can choose to use their gender to take advantage or exploit a situation — and to Trump, running a presidential election campaign against a female candidate seemed like the perfect example. In May 2016, according to NPR, Trump told supporters in a Spokane, Washington rally, "You know, [Hillary Clinton is] playing the woman's card. If she didn't play the woman's card she would have no chance, I mean zero, of winning."

But it definitely wasn't the only time he threw that idea around. A month earlier, according to The Independent, Trump said,

In other words, it doesn't actually matter that Clinton has far more political experience and actual policy knowledge, or that she won the popular vote by over two million votes, according to TIME. As far as Trump is concerned, the only people who would vote for her are women, and only because she is a woman.

The Inevitability Of Sexual Assault In The Military

As president, he may be Commander-in-Chief, but Trump doesn't appear to have a particularly supportive view of having women in the military (and it's definitely no secret how he feels about transgender people serving).

To be fair, his perspective may have changed now that he is president, but in 2013, Trump tweeted about the high rate of unreported sexual assaults in the military by quipping, "What did these geniuses expect when they put men & women together?" according to Indy 100. (Presumably they expected people to serve their country without having to worry about being assaulted by the people they are serving alongside?)

Raising Children Is A Woman's Job

Although Trump never exactly came across as a hands-on Dad of the Year, he made his views on child care pretty clear — and they were about as far away from feminism as you can probably get. In April 2016, Buzzfeed looked back at various interviews Trump gave in the years before he ran for president, and he didn't try to mince words about the division of labor in his various marriages.

For one, Trump said in 2005 that he doesn't change diapers, and that the men who do are just following their wives' orders to "act like the wife." He said,

Other parenting gems? Trump said he "won’t do anything to take care of" his children, other than "supply funds," and told Howard Stern, it was a source of tension in his second marriage to Marla Maples. He said,

Marla used to say, ‘I can’t believe you’re not walking Tiffany down the street,’ you know, in a carriage. Right, I’m gonna be walking down Fifth Avenue with a baby in a carriage. It just didn’t work.

Perhaps the most significant takeaway about Trump's view on feminism though is that these quotes, while telling, are only a few of the comments he has freely and openly made about his views on women and the issues that affect them. Sure, it may have made for an interesting sound bite, or allowed for Morgan to tweet out his "breaking news" about the interview, but let's be real: no one was ever under the impression that Trump was supportive of feminism. And, given that he is the actually the leader of the country, that is a real disservice to everyone.