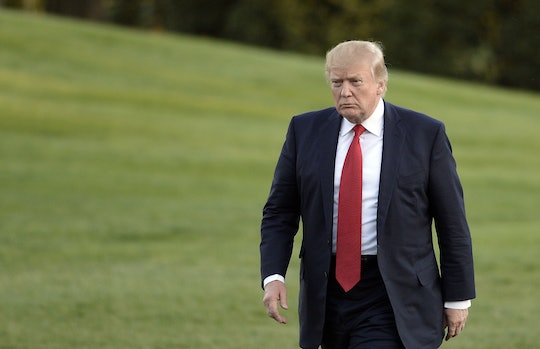 On Monday, a lone gunman walked into North Park Elementary School in San Bernardino and shot his wife, Karen Elaine Smith, a teacher at the school, before turning the gun on himself. He also injured two students, one whom was in stable condition and one who died later on Monday afternoon. It was a tragic act of violence, which is why it's so surprising that President Donald Trump hadn't issued a response to the North Park shooting as of Monday evening. Sure, the guy's busy — he's the president. But the shooting made major network news and given that he's such a prolific tweeter, one would think that he'd at least offer his condolences.

No one in the president's family or inner circle has responded either. Not Ivanka, his sons, first lady Melania Trump, or even Vice President Mike Pence. It was a busy day at the White House, of course, as the Trump administration celebrated the swearing in of the newest Supreme Court Justice Neil Gorsuch. But those congratulations and a Passover greeting were some of the only tweets on Monday from Trump's two Twitter accounts.

For her part, Betsy DeVos, secretary of education, made a statement thanking the "first responders, teachers and school administrators” who protected the students during Monday's shooting. She asked Americans to keep the victims "impacted by today’s senseless violence in your prayers," so at least someone in the administration appears to know what happened.

The shooting was the result of a domestic dispute and many people on social media were outraged that a man could fatally attack his partner at her job, and with a gun. It wasn't an act of terrorism, but senseless gun violence, which could be why Trump is taking so long to craft a tweet. It's hard to make sense of a tragedy like that.

Although the gun was allegedly legal and not visible when the shooter entered the front office, it's also possible that Trump doesn't want to draw too much attention to the event, given that the National Rifle Administration supports him and are lobbying politicians such as DeVos to allow guns in schools in the name of protecting students. (Remember the grizzly bear line from her confirmation hearings?)

In fact, one of the first things Trump did after taking office was sign an order rolling back some Obama-era gun legislation. The NRA lauded the president, saying that the move "mark[ed] a new era for law-abiding gun owners, as we now have a president who respects and supports our right to keep and bear arms."

"Our thanks go to President Trump and the congressman and senators who led the fight for this important legislation," the organization stated at the time.

Hopefully Trump will weigh in soon about the tragedy and put some people at ease. There are even some people on social media talking about how it might be a good way to get his attention, given that the images of children dying in Syria from a chemical attack changed his mind about taking military action. Maybe seeing that a 8-year-old boy died from injuries sustained by standing next to his teacher during a shooting could change his mind about gun laws, too.