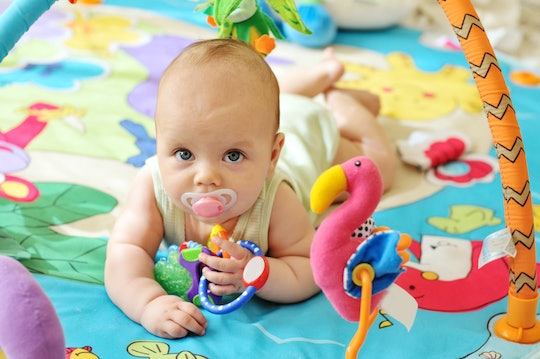 By now, most parents are more than well aware of the dangers of putting their babies to sleep on their tummies, but not as many know just how important it is for them to spend some time on their stomachs when they're awake. Sure, "tummy time" is a term you're probably familiar with, but you might not be as familiar with what can happen if your little one doesn't get enough. So what are some signs your baby needs more tummy time?

After the American Academy of Pediatrics launched its famous "Back to Sleep" campaign in 1992, the rate of Sudden Infant Death Syndrome in the U.S. fell by over 50 percent, according to the AAP. That's an undeniably good thing, but as the years went by, doctors began noticing some less-than-good consequences of the shift to putting babies on their backs. One 2008 survey of 400 pediatric physical and occupational therapists conducted by the American Physical Therapy Association (APTA), for example, found a widespread increase in motor skill delays caused by babies spending an insufficient amount of time on their stomachs, as ScienceDaily reported.

"We have seen first-hand what the lack of tummy time can mean for a baby: developmental, cognitive, and organizational skills delays, eye-tracking problems, and behavioral issues, to name just some complications," said APTA spokesperson Judy Towne Jennings, PT, MA, a physical therapist and researcher.

Worried that your baby hasn't been on her belly enough lately? The following are some signs that could mean she could be lacking in the tummy time department.

More Like This
Can You Help Your Baby’s Hair Grow?
22 Instagram Captions For Pics Of Your Baby Trying Solid Food For The First Time
These Best Toys For 6-Month-Olds Will Do More Than Just Keep Them Occupied
The Best Apps For Selling Used Baby Gear