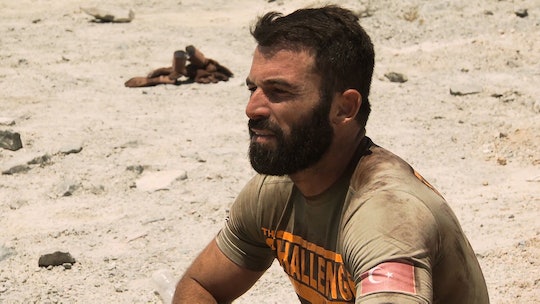 Turbo might be one of the most well-liked competitors on The Challenge this season, but that doesn't mean he's immune to the drama that comes with being on the show. Until recently, he has managed to stay out of most of it, but lately, Turbo's feud with Dee and Ninja Natalie on The Challenge has fans taking sides. It all started when Ninja Natalie and Turbo teamed up last week for a competition. Everything seemed to be going fine until she got a little impatient with him, but Turbo wanted to take his time to make sure they did the competition right. In the end, it started a huge verbal altercation.

Enter Dee, who wanted to stick up for her Challenge BFF and stand up to Turbo. But the more Ninja Natalie and Dee came for Turbo, the more he pulled back. And where they were once three close friends this season, the women are now all but dead to Turbo. To make matters worse, Turbo and Ninja Natalie came out on top for the competition, so all of that shouting was totally unnecessary. Where Turbo stands, that kind of disrespect shouldn't go unpunished and he pretty much shut out both women afterward.

Even when Ninja Natalie tried to apologize to him later on, he wasn't into it. On the one hand, her frustration was understandable since The Challenge competitions can be stressful. Turbo did feel like he was ganged up on, however. And now, Challenge fans have made up their minds about the ongoing feud.

Most fans who have backed Turbo all season are continuing to support him during this feud. They are quick to defend him and point out where they believe Dee and Ninja Natalie are wrong in the situation, which really has been blown way out of proportion. Maybe if Dee had stayed out of it, Ninja Natalie and Turbo could have resolved their issues, but now it's hard to say if they will ever be friends again.

Other fans admitted that Turbo might not have been innocent in the matter either, but that still does not warrant Dee and Ninja Natalie's behavior. And while some fans aren't sure if they totally stand by Turbo, the consensus seems to be that Turbo was rightful in feeling attacked by the two women.

Although Ninja Natalie's behavior was what set off the fight last week, it was likely Dee's interference that made matters worse. And some Challenge fans have pointed out that Dee should have just stayed out of the argument altogether.

To Ninja Natalie's credit, she did apologize to Turbo and tried more than once to fix things between them. For Turbo, though, it was too late. The damage had already been done. And as some viewers pointed out, Turbo had every right to not accept her apology, especially as he hadn't had a lot of time to process what had happened between the incident and her apology that night.

Maybe by the time the three competitors meet up again on The Challenge reunion all will be forgiven. Turbo doesn't seem like an unreasonable guy and until now, he has mostly kept his hands clean of a lot of the drama that has circulated throughout the house this season. Maybe time and some distance apart is what they all need to really move past this.

When you have a fight of that magnitude with a friend you also have to live with and see for days afterward, it can be hard to move on. For right now, however, Turbo seems to have most of The Challenge fandom's support.