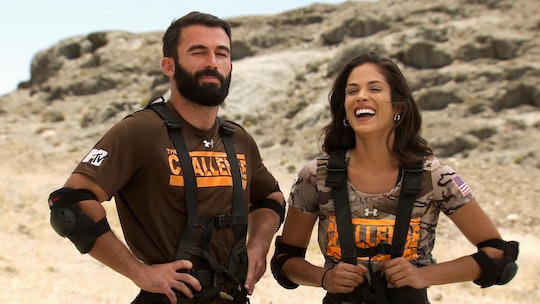 Turbo On 'The Challenge' Is Basically America's Sweetheart This Season

Every so often on The Challenge, you will find a player who is the strong and sensitive type and this season, Turbo is that competitor. He gave it his all as Nany's partner and arguably carried their team for the first half of the season. I know I'm not the only one who saw the disappointment in her face when TJ announced that the teams were dissolved. But the tweets about Turbo on The Challenge prove that fans are all rooting for him and they are basically in love with the athletic powerhouse who isn't afraid to show his sensitive side.

Throughout Turbo and Nany's partnership this season, Turbo worked hard to help them win competitions while also bringing her up and encouraging her to see her potential as a top player herself. As a Challenge veteran, Nany can hold her own, but it was probably nice having Turbo by her side. He seemed to know the right thing to say to keep Nany on the right path and she totally lucked out when he chose her as his partner. Unfortunately for her, there are no more teams and fans have proven on Twitter that Turbo is pretty much America's sweetheart this season. If viewers had any pull over who wins, something tells me they would largely be rooting for Turbo.

Some fans have loved Turbo from the beginning of the season. He has this innocence about him when it comes to The Challenge drama, but he still acts like a total beast during competitions. He is above the drama himself unless it means defending himself or Nany and that just adds to his honorable personality.

In the preview for tonight's episode, Turbo and Hunter get into a verbal altercation and fans on Twitter aren't having it. At this point, Turbo can do no wrong and anyone who treats him otherwise will find plenty of Challenge fans with internet pitchforks at the ready.

Other fans are just here for their crushes on Turbo. He seems to have it all and although he hasn't made any romantic connections on The Challenge this season, fans are kind of in love with the former Survivor Turkey contestant.

What you see is what you get with Turbo. He isn't into the politicking that other players do at this point in the season and he never acts like he's better than any of the other competitors. One fan on Twitter called him "wholesome" and that might be the best way to describe Turbo and why The Challenge fans love him this season.

Honestly, if I didn't know any better, I would assume that Turbo is one of the veteran players this season and not a rookie. He has given the game his all and fans are already gunning for him to return on another season. Even if he wins The Challenge: War of the Worlds, which is totally a possibility at this point, I could see Turbo returning in another season.

Now that the teams are over on The Challenge, Turbo has no one to answer to or work for but himself. So if he was already a fierce competitor while working with Nany, I can only imagine how much further he will rise up the ranks now that he's riding solo. And of all of the other players left right now, he is one that a lot of fans seems to agree about wanting to win. It's hard to find one bad thing to say about him and if he keeps working at it as hard as he has been, Turbo could win this thing in the end.