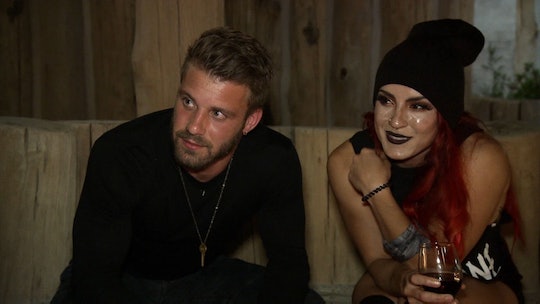 Showmances on The Challenge are nothing new and if a couple has what it takes to make it outside in the real world, then more power to them. But Paulie and Cara Maria came into The Challenge: War of the Worlds hot and ready to flaunt their relationship when it wasn't even necessary. At this point in the game, fans are kind of tired of their relationship and the tweets about Cara Maria and Paulie on The Challenge prove that viewers could do without it this season.

There’s nothing wrong with a little PDA and it’s great that Cara Maria and Paulie were able to make their relationship work after the cheating drama they dealt with during and after last season. I just don’t think the rest of their fellow Challenge cast members were prepared for the hookups and the way their relationship would affect other people in the house.

Now, fans on Twitter are being vocal about their distaste for the relationship and even if you ship the two of them together, it’s hard to ignore that their relationship has become a little much on a show where there is one sole winner and it’s supposed to be every person for him or herself.

Some fans are legitimately over it. As in, they would probably fast forward through any scene involving the pair if they could. When it comes to listening to Cara Maria point out all of the places in The Challenge house where they could potentially hookup, I can't say I don't agree.

Other Challenge fans are also over Cara Maria and Paulie’s vendetta against Kyle. Cara Maria and Kyle dated before she hooked up with Paulie and this three-way feud has been a *thing* all season. I don't know if Kyle still has feelings for Cara Maria, or vice versa, but I don't think it's healthy to be this upset with your ex-boyfriend when you have already moved on with your current boyfriend.

I am all for finding love in a hopeless place, a.k.a. on The Challenge, where finding love isn't exactly the name of the game. But when it interferes with the actual game or makes the show a little less enjoyable, that’s where it becomes an issue. Some fans on Twitter have found almost every scene that focuses on Paulie and Cara Maria’s relationship to be a serious vibe killer.

Last June, Cara Maria and Paulie spoke to MTV about their showmance on The Challenge: Final Reckoning which occurred while he had a girlfriend back home. They explained that they fell for each other and had every intention of telling Paulie’s girlfriend as soon as the show ended and they were able.

"I knew what I wanted, he knew what he wanted. And at the end of the day, you can't be angry with someone for deciding that they want something else and being honest about it as soon as they were able to," Cara Maria said at the time. To some fans, it almost seems like they want to show off their relationship on-camera after the cheating drama and it’s getting to be overkill.

It is going to be interesting to see how either Paulie or Cara Marie do on this season when one of them ends up going home. There’s nothing wrong with being happy and in love, especially in a house that can get a little stressful at times. Some Challenge fans would just prefer it if they toned it down a few notches. Because of their strength as competitors both together and separately, they have both remained safe, but it’s only a matter of time before Paulie and Cara Maria realize that The Challenge is more about competing for money and less about flaunting your relationship.