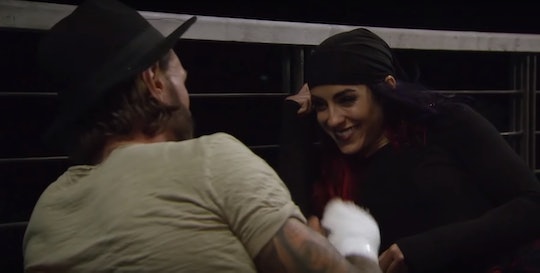 Life can be hard when you're working on The Challenge against one of your exes. These days there's a rotating supply of past competitors and their exes to make the game even more competitive, and Cara and Kyle have already started to air out their dirty laundry. There's been a lot of talk about Cara and Klye's history on The Challenge and lets just say these two have a complicated one.

Right now, Cara is happily in love with Paulie, but last season on The Challenge, all three competitors fought for the money while navigating their would-be love triangle. That's where things got especially messy. The season before, on The Challenge: Vendettas, Kyle and Cara's romance heated up fast and they were definitely an established couple who ended their season together. But, Cara told Betches.com, once they got home, things started to change. They were good for a while and Kyle even met her family, but then he left for a trip to Thailand and essentially ghosted her. He spent the better part of The Challenge: Final Reckoning last season either flirting with Cara or acting poorly out of jealousy if she spoke to other guys. It was a far cry from their romance the previous season, and now, Kyle has brought that mess to War of the Worlds.

According to Cara, Kyle went into the house last season sending out mixed signals. She told Betches.com in the same interview that she made it clear that they could have an open relationship since they would be doing the long distance thing. But apparently, Kyle couldn't make up his mind.

"I can’t follow him from one moment to the next, from one lie to the next. He’s lying saying he has a girlfriend, then he comes in and hooks up with Faith," Cara said, of Kyle's behavior last season. "If he could have just been a man and come in and said, 'look I want to sleep with other people. Let’s be friends. I’ll still look out for you, I’ll still work with you, but I want to sleep with other people.' I’d be like okay, you’re an idiot because I’m awesome, but okay. Just tell me!"

When Cara started to catch feelings for Paulie, Kyle's jealous streak came out, despite having his own hookups on The Challenge last season. He was openly rude to Cara and things only got worse when they saw each other on The Challenge this season. Judging by the promo for tonight's episode, the kind of/sort of love triangle between Paulie, Cara, and Kyle comes to a head. It looks like Paulie and Kyle finally go at it and honestly, it could mean that one of the guys gets sent home ahead of being sent to the killing floor for elimination. If either of them actually starts to throw blows, they could ruin their chances of winning.

It all boils down to Kyle’s alleged hot and cold attitude with Cara following their Vendettas fling. She told Us Weekly that during Final Reckoning, he would be sweet to her one minute and the next, he would be talking down to her or flaunting another romance in her face. It was a side of him she had never seen before, so naturally, going into War of the Worlds, she wanted nothing to do with him.

"I feel like this season he was really feeling himself and became way more conceited and just turned into a nastier version of himself without a care," Cara said, of Kyle’s attitude last season on The Challenge. I don’t really get that vibe so far this season, but even if he has changed, it’s likely going to be a case of too little too late.