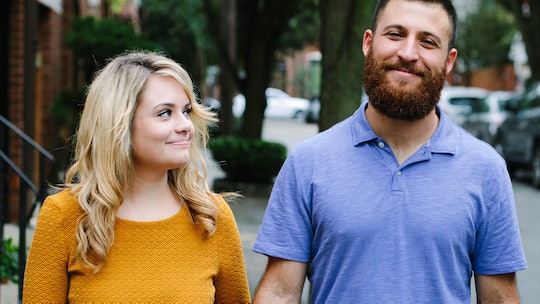 Here's How Twitter *Really* Feels About Luke & Kate On 'MAFS'

Season 8 of Married at First Sight has been a wild roller coaster ride and it's about time some of the couples got off — Kate Sisk and Luke Cuccurullo in particular. The pair made headlines early on when the season premiered back in January, but tweets about Luke and Kate on Married at First Sight make it painfully clear that fans are not sure the couple will make it — or at least they hoped they don't. And since the beginning it's only gone downhill.

On Married at First Sight, individuals sign up to be paired with — and legally married to — a complete stranger chosen for them by a team of experts. Think of it like an arranged marriage, but rather than having your parents — you know, the people who raised you and probably know you best — choose who you are to marry, a group of experts does it for a reality show on Lifetime. While there are still a few couples that are still together today, for Luke and Kate, the experience has been anything but a fairy tale.

In an early episode of MAFS, Luke revealed that his first kiss with Kate made him feel "repulsed and dead inside." While Luke previously told Romper that he should have said that he wasn't feeling the kiss, the deed was done and it left a sour taste in the mouths of fans everywhere. Since then, Luke's name has been attached to a string of bad behavior. However, it was the Feb. 26 episode titled "One Month Down, Forever To Go?" that broke the camel's back.

In the episode, Luke and Kate have a discussion about the status of their relationship. Kate expresses that she has given her partner everything that she has to offer and Luke tries to put the blame of their fractured relationship on Kate's drinking. An expert steps in and says that it seemed like an excuse for his own feelings and behavior.

Meanwhile, Luke decides to spend time with his friends rather than with Kate on their one-month anniversary. Kate completely breaks down during an interview with producers, but Luke eventually comes back and tells her that he wants to be with her. An expert weighs in and explains that this sends mixed signals and is "detrimental to the future of the marriage because it creates instability."

And fans aren't buying Luke's sudden change of heart, either. While some fans are calling out Luke's actions and drawing attention to things he did throughout the season, others are simply wishing Kate the best moving forward.

Whether or not you believe Luke is manipulating Kate, it's clear that the Married at First Sight fandom doesn't approve of Luke for Kate. And an overwhelmingly amount of fans on Twitter have been outspoken about their support for Team Kate. But, as the eighth season comes to a close, fans are itching to see if Kate and Luke will stay together or break up. Correction: they're hoping that they break up.