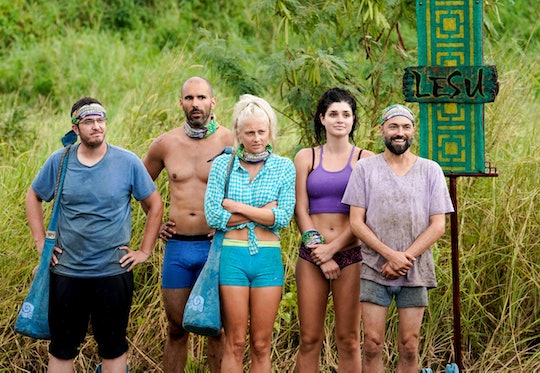 This Season Of 'Survivor' Has Some Memorable Castaways

Survivor: Edge of Extinction is just a few episodes in and fans are already gunning hard for certain players to make it to the end. It helps that some of the competitors this season are returning players who already have their individual fanbases, but Survivor viewers are also pulling for a few choice newbies. Every season there are favorites, but the tweets about Survivor show that some fans already have their favorite players of the season lined up.

It’s easy to make a Survivor fantasy bracket ahead of the season based on players' bios and how you hope they might do on the island, but it’s a whole other thing to actually see them in action. And after just a few weeks of watching some of the returning players and some of the newbies fight for their survival, fans have picked their favorites.

To be fair, there are two sides to every top player. The Wardog, for example, has received a lot of love for his brazen attitude and strength, but some fans are also calling for his elimination. And while Wendy might be an exciting new addition for some fans, others still can't get over the fact that she let those chickens out and in doing so, went against her tribe. It’s always a double-edged sword on Survivor, but the fans on Twitter have made up their minds and there are already some clear favorites this season.

Kelley might be a returning player with a little bit of an advantage over some of the newbies, but that hasn't stopped fans from rooting for her. She has already formed a strong bond with the Wardog and regardless of tribes, that’s important in Survivor. Even when Kelley resorts to tears, her fans are quick to come to her defense and applaud her for being able to stay in the game a little longer.

But as far as newcomers go, Wendy is starting to turn heads, and not just because of her bright blue hair, though that does make her a little more recognizable and easier to remember. Despite rubbing some of the other competitors the wrong way initially, Wendy has managed to stay in the game for the first few weeks and some Survivor fans on Twitter are rooting for her.

Lauren also has some Survivor gods looking out for her. She is the only contestant so far this season to be voted as Reddit’s player of the week twice and she has skirted elimination. She also has two solid alliances with the Wardog and Kelley, which could be important down the line. It’s easy to see why some fans are hardcore rooting for her right now.

The most popular newcomer this season, however, is probably the Wardog. Some players don't love the fact that he sometimes talks in the third person or that he’s almost too confident, but you need to have a lot of confidence to go far in this game. Other fans can't help but admire how much work he has put into his social game. I haven't decided if I’m Team Wardog just yet, but he already has plenty of supporters rooting for him to win this thing.

It might be a little too soon to say who's going to win on Survivor this season, but there are definitely some big contenders in the form of both new and returning players. The Wardog even has the potential to be memorable enough to return to another season somewhere down the line. Depending on how challenges and voting go in the next few episodes, the top players could chance, but right now, Survivor fans on Twitter have spoken.