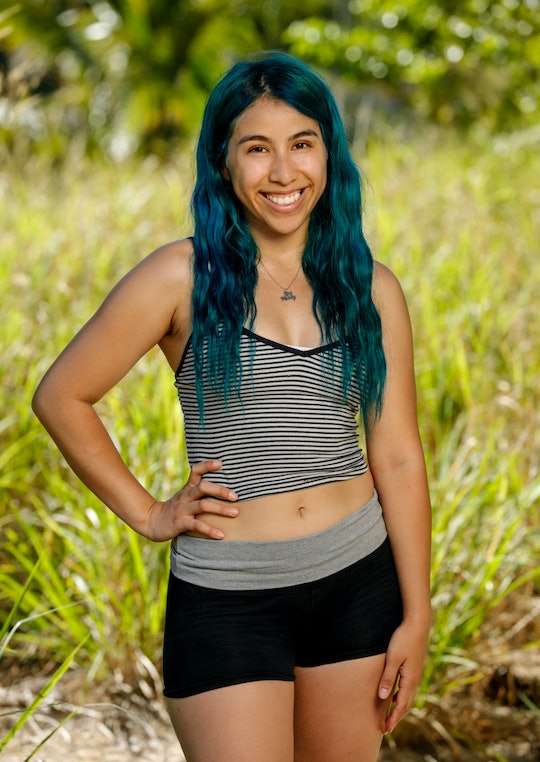 It might still be early in the season to decide who will win Survivor, but Big Wendy Diaz may know how to work people better than almost anyone else. She comes across as a sweet and almost subdued castaway, but she has the kind of athletic experience and hobbies to pull through in important physical competitions. Even before the season began, fans were wondering who Big Wendy on Survivor is and I don't know if it’s because of her bubbly personality or her shockingly blue hair, but she definitely stands out.

Wendy has proven that she isn't afraid to stand her ground and that she can definitely hold her own. But, she told Entertainment Tonight Canada, she knows how to use her personality to manipulate others, if needed. "I feel like I’m a wolf in sheep's clothing," she said. "You’re not gonna expect it from me, so they won't see me coming."

She said that her strategy, at least in the beginning of the game, is to play dumb as opposed to playing too hard and getting voted off at the start. Her Survivor bio says that her hobbies include "swimming, rock climbing, [and] anything active," so she’s likely here for more than just the experience of Survivor.

Wendy has Tourette’s Syndrome and has a YouTube channel dedicated to vlogging about living with her different tics and what it's like managing them in different settings. She’s very open about her own tics and in one video, she describes the different physical and vocal types of Tourette’s that people, including her, live with.

She has another personal YouTube channel that includes videos of her daily life, some of which show her creating 8-bit art using Rubik's cubes. When she’s not making videos for the internet, though, Wendy manages her online geek culture-inspired clothing and accessory shop, Pixel That.

She runs her business with her boyfriend and she seems pretty close to her family, who all donned blue wigs to support her as they watched a recent episode of Survivor. Her boyfriend even had on a "Big Wendy" T-shirt and if that isn't dedication, then I don't know what is.

It's hard to say how long Wendy and her boyfriend have been together, but her Instagram features plenty of photos of them working on Pixel That and having Lunchable dates together. I mean, it’s kind of an adorable relationship from where I’m sitting. And just in case the blue hair didn't give away her open-minded attitude, Wendy is no stranger to Comic-Cons with her boyfriend and she plays Pokémon Go. She honestly seems like a lot of fun and she gets bonus points for having a full house with four dogs, two cats, and two turtles.

Wendy is also fairly athletic, and like she said in her Survivor bio, she’s no stranger to pushing her body to its limits. According to Instagram, she does everything from swimming and hiking to hitting the gym. Her small frame next to some of the other Survivor castaways might not seem very intimidating, but that’s probably where part of her laid back strategy is.

She said in her Entertainment Tonight Canada interview that she has everything it takes to win Survivor this season. She reasoned that some players might be more strategic than athletic or vice versa, but that she "has it all" to win. "Not to toot my own horn, but I feel like that’s me," Wendy said.

It’s still too soon to say who will make it to the end of Survivor this season, but it looks like Wendy has as much of a chance as anyone else.