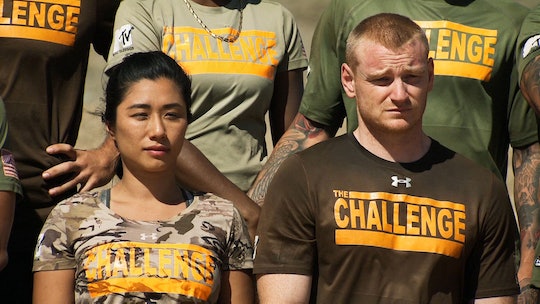 'The Challenge' Fans On Twitter Are Rooting For Wes & Dee

It can be hard to put all of your trust into a stranger on The Challenge, but somehow this season, Dee and Wes have managed to work together better than almost any other team. Although they are both fierce competitors, they came into the game with their own strengths and weaknesses and so far, they have built the other one up. It’s been a match made in reality TV heaven and the tweets about Wes and Dee on The Challenge show how much fans support their partnership.

Even with a few targets on Wes’s back this season, he and Dee have remained loyal to each other and haven’t faltered from supporting the other one when it was needed. Like last week, when they had a swimming challenge and Wes took it upon himself to actually teach her how to swim. That is some serious dedication and I refuse to believe Wes did it just because there is a huge prize on the line. And while Dee and Natalie are BFFs, she has still remained loyal to Wes and their partnership. If the teams are eventually broken up or switched this season, it's going to be hard to see Wes and Dee no longer working together. But for right now, Challenge fans are loving them as a power pair.

So far, Wes and Dee have won the most competitions and even have an elimination round win under their belt. It’s honestly a wonder that they haven't been targeted more because of their strength as a team, but their teamwork is what makes them so strong. Even if they find themselves on the killing floor again, they could likely come back from it. It’s not surprising that some Challenge fans on Twitter just love watching Wes and Dee win competition after competition while they work together with fierce loyalty.

Other fans are kind of obsessed with the swimming lessons Wes gave her. I know that it was partly for selfish reasons, so that they could potentially win the challenge ahead, but he still took the time and care to help her learn how to swim. Their dedication to each other is part of what has gained them a lot of supporters in the recent weeks and if they continue to work so well together, they could make it to the end.

Fans have been all over Wes and Dee from the start of the season. Unlike some other teams who needed a little time to gain their footing to work well together, Wes and Dee seemed to be on the same page from the start. And even though fans have zero influence on what happens on The Challenge, they are hardcore rooting for Wes and Dee right now.

Although as a veteran player, Wes has a few enemies in The Challenge house this season, he is one of the players who has managed to not take any of that into his partnership. While other players like Da’Vonne and Josh have had to deal with the fallout of their partner’s actions, Wes and Dee have worked hard together without letting anyone get in the middle of them.

Because the season is only halfway over, there’s still time for Wes and Dee to hit a roadblock in their partnership, but right now, they seem like one of the strongest teams. Not only are they both physically strong and best other players in competitions, but they work so well together that it’s surprising that this is their first time working together as a team. And as long as they stay on a similar path, chances are, Wes and Dee could make it to the end together.