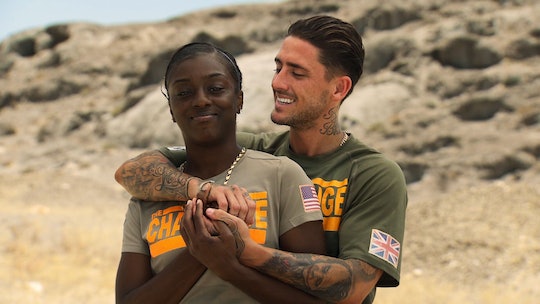 The pressure has been very real this season on The Challenge. Not only does one player get sent home if they lose the elimination challenge, but their partner is also sent packing. This means that if your partner rubs someone the wrong way or already has unresolved beef, you too will suffer at their hands. It’s kind of a bum deal, but it comes with having teams instead of individual players. So will The Challenge teams change this season? The game could be totally flipped on the players and lead to new alliances, feuds, and surprise eliminations mid-season. Right now, The Challenge host TJ hasn't alluded to any big twist that would break up the 10 remaining teams, but at some point, some of the teammates will have to stop paying for their partner’s vendettas against other players.

Most recently, Da’Vonne has felt the brunt of the fallout of Bear’s behavior with the rest of the competitors. He continues to rub everyone the wrong way from week to week and even those in the UK alliance along with him don't seem like they love having him as an ally. Because he acts like he’s almost untouchable and has made some enemies of veteran players, a handful of teams are currently gunning for him to be eliminated. This would mean that Da’Vonne would also be sent home because she is his partner. Before that happens, though, The Challenge teams could be switched up.

Earlier this season, there was a hint that the teams could eventually change. Before a double elimination, TJ said that if the remaining players were from different teams, they would form a brand new pair. It didn’t happen, but it might have gotten some viewers thinking about what’s to come later this season.

When the 10 teams are narrowed down to five or so, they could be dissolved, making the rest of the season play out as every man or woman for him or herself. It would also mean that the $1 million prize would go to one person instead of a team of two, and that definitely changes things. Last season on The Challenge: Final Reckoning, Ashley famously decided to keep all of the winnings when given the chance to split them with her partner, Hunter. If the teams are broken up this season, it would eliminate the chance of that happening again.

The Challenge: Invasion of the Champions went a different way than this season might, but still had a twist. Instead of starting off with teams, the season began with the "underdogs" battling at a separate location for the chance to be brought to the actual season house. Once there, they were put into teams, but while they competed in "The Shelter," they were in it for themselves only.

If The Challenge teams change or if the teams are dissolved altogether this season, it would be a pretty unexpected twist. Right now most of the members of the teams have leaned on each other for support in all things related to the game. If all of that is shattered by having the script completely flipped on them, it could drastically change things.

The UK alliance, for example, might also dissolve if the game becomes every man and woman for his or herself. The game will suddenly be about keeping yourself safe rather than looking out for your teammate and that could also make other alliances shift. It would certainly throw a wrench in a lot of players' games as they currently stand, and judging by the twists from past seasons, it isn't totally out of the question. For now, the teams are still together, but once more players are eliminated, that could change.