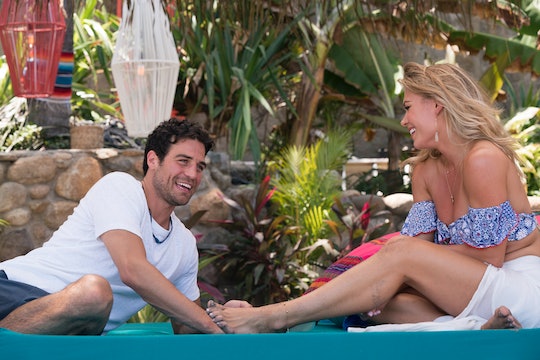 A show's introductory sequence, if well-executed, can become as iconic as the show itself. Think The Brady Bunch, Friends, or, yes, Bachelor in Paradise. Even if you could fast-forward through the intro, why would you want to? After the Season 5 premiere, fans on Twitter loved the Bachelor in Paradise intro and for good reason. It may, in fact, be the best BiP intro yet.

Each season, the theme song, "Almost Paradise" by Mike Reno and Ann Wilson stays the same (and stays in your head for hours afterward), but the sequence of scenes introducing each cast member changes. Bachelor in Paradise is the most self-aware of all the Bachelor franchise shows, and in their intros the cast-members all show that they're in on the joke. Each sequence usually shows them goofily acting out what they were known for on the show. Somehow, it always works and this season has some of the best little inside jokes that only those familiar with Bachelor Nation would appreciate.

There was Annaliese with a parrot on her shoulder, which was of course in reference to the animal horror story she had on The Bachelor last season. Then, "Venmo" John counting his stack of cash. And of course, we also had Jordan with the now famous golden booty shorts that Becca Kufrin gifted him on The Bachelorette. There was legitimately no spot in the Bachelor in Paradise intro that was wasted and Twitter was living for it.

Unlike both The Bachelor and The Bachelorette, Bachelor in Paradise doesn't typically introduce all of the season’s contestants at once. Production usually lets the first group marinate and get to know each other before sending in more surprise contestants throughout the season. But Season 5’s intro seems longer and much more jam-packed than seasons of the past, so it might even have the biggest cast the show has seen yet.

Fans on Twitter have shown appreciation for almost every contestant’s scene in the intro this season. One fan even correctly predicted that Krystal’s would involve her throwing glitter like she mimed during Arie Luyendyk Jr.’s season of The Bachelor.

Wells, who’s been part of Bachelor Nation for a few years now and returned as the bartender, also got some love on Twitter for his intro during the theme song. To be fair, Wells is one of those stars of the show who can really do no wrong, but even he was given the perfect intro spot.

Fans on Twitter were also all about Bibiana’s scene in the Bachelor in Paradise intro. She’s been a memorable contestant in the franchise since she was on The Bachelor and then on The Bachelor Winter Games. But her "mic drop" was nothing short of perfect. And really, everything she did on the premiere was golden.

The Bachelor in Paradise theme song intro is definitely the gift that keeps on giving. The only thing second to the hilarious scenes and forever catchy song is the amazing drama that unfolds each and every season. And I am fully prepared for more of the same this time around.