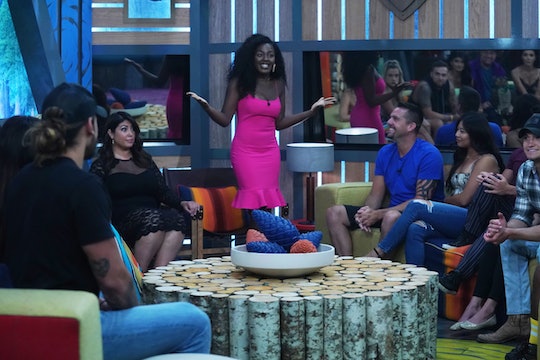 When the Big Brother house is divided, you have to expect that at some point, things will get personal. So instead of trash talking each other's game in Sunday's episode, Kemi and Bella argued with each other on a different level. It could have ended badly, if it were not for production calling Kemi into the Diary Room, and the Twitter reactions to Bella and Kemi's fight on Big Brother show that fans are tired of Gr8ful being the majority alliance.

Kemi took a chance during her eviction speech to tell the rest of the house that Bella and Nick are playing both sides of the house with their loyalty. This could have been a baller move if Kemi was headed out of the house rather than upstairs to Camp Comeback, but when the dust settled, Bella confronted her for what she said. Kemi stood behind her accusations and said that she thought the rest of the house had a right to know what was going on. Kemi drove her point home when she told Bella, "Do you think you can go around, making 100 alliances, and no one is going to find out?"

Bella wasn't about to take any of that lying down, though, She clapped back at Kemi and made fun of the fact that she is now in Camp Comeback with just "two friends" to back her up. It was a low blow, but then again, both women held their own in their fight. And now, fans on Twitter have put in their own two cents.

You might say that Kemi’s speech helped to make the cracks begin form in the Gr8ful alliance. Until now, it has been the dominant alliance in the Big Brother house. If the other members of the alliance start to doubt Bella and Nick, however, it will be the beginning of the end. If the fight was the catalyst starting its downfall, most fans are here for it.

Some fans have Kemi’s back about the fight. Bella hasn't made any big moves on her own, so from some viewers’ perspectives, there’s no reason to completely root for her anyway. And they seem to think that Bella instigated the fight for no reason other than to get a rise out of Kemi.

Other viewers who already loved Kemi are over Bella talking about Kemi behind her back. This fight only helped fan their dislike of Bella, which isn't good for Bella if she makes it far this season and continues to step on toes. Then again, if the women just avoid each other, it might make it a little easier to avoid more fights.

Other fans just miss the friendship Bella and Kemi had at the start of the season. However, it is admittedly a lot easier to make friends when alliances aren't fully formed yet. At that stage in the game, the players still have the potential to be close and haven’t yet flipped votes on each other or taken part in a blindside. A lot has changed in the few weeks Big Brother 21 has been in production and after Kemi and Bella's fight, some fans wish things could go back to the way they were.

Unfortunately, unless Gr8ful falls and Bella shows Kemi that she has a newfound loyalty to her, their friendship has sailed and is irredeemable. One of the problems the members of Gr8ful have is that they have so much power that they aren't thinking ahead. Some of their targets who stay in the house could be jury members and no one in Gr8ful has done any jury management with anyone except other houseguests in their alliance.

It is still early to worry about that, but now that the lines have been clearly drawn, the other houseguests are could target all of the Gr8ful alliance members. And right now, fans are ready for a change.