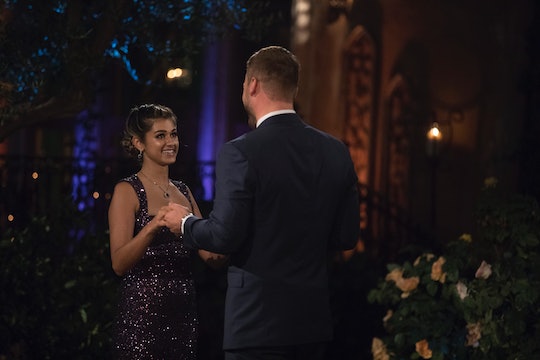 There’s only so much that can be covered in one episode of The Bachelor, so if you were a little peeved that there was no explanation of Kirpa’s chin bandage in Monday’s episode, you aren't alone. In her first scene of the episode, she suddenly had a bandage on her chin and it’s sparked some concern, including a new Twitter account effectively titled Kirpa’s_Chin. Even now, the Twitter reactions to Kirpa’s chin on The Bachelor prove how concerned and confused fans were. It was also confusing that no one on the show explained what happened to her or why she had to wear the bandage for the duration of the episode.

Afterward, ABC posted a deleted scene from The Bachelor that explains what happened in much more detail. According to Kirpa in the clip, she was taking a picture of the sunset when it started to rain and she slipped and fell on some rocks. This resulted in five stitches in her chin. She also had a bandaged wrist, but luckily, nothing was broken or sprained. I guess all of the Colton drama with Nicole and Onyeka was too exciting to lend some of that screen time to Kirpa’s emergency room visit. But it would have definitely helped calm down some fans on Twitter who were confused and worried about Kirpa.

In the clip, Kirpa says, "Thailand f-cked me up!" and it makes me sad that so far, we haven't been able to see more of this totally relatable and clumsy contestant. I guess that drama, fighting, and Colton tattling gets you more attention than getting into a fight with slippery rocks.

Tuesday, Kirpa took to Instagram to explain the injury again. Maybe some fans were concerned that there was a brawl that didn't make it to air. It was a lot less exciting than that, but thankfully, Kirpa’s fall only resulted in a few stitches and nothing more serious. "PSA: selfies can be dangerous people," she wrote on Instagram. "When trying to be extra af take necessary precautions." I swear, if this woman isn't on Bachelor in Paradise, I will riot.

Some fans on Twitter said they would have rather heard about Kirpa’s injury than learn more about Cassie losing her virginity. Others would have gladly traded some of that Nicole and Onyeka drama for an explanation about our girl Kirpa.

I feel like it would have been easy to quickly explain what happened to Kirpa and move past it, but I guess it didn't really fit in with the narrative of the rest of the episode. Colton had a couple of one-on-one and group dates, then Elyse sent herself home, and the episode ended at the height of Nicole and Onyeka’s fight. The least Kirpa could have gotten was the credits scene at the end of the episode. We didn't even get to see Colton jump the fence. Besides seeing Heather get her first kiss and hearing the first "L-word" of the season from Hannah B., the episode was definitely lacking in some spots.

Overall, Kirpa hasn't gotten much screen time on The Bachelor, but that could be because she just hasn’t been dramatic enough. She’s been smart enough to stay out of the feuds and fighting while still getting those roses every week. Because of her personality, though, I can definitely see her on Bachelor in Paradise, barring any other accidental injuries. Then again, that resort in Mexico has rocky cliffs of its own. So if Kirpa makes her way to Paradise this summer, hopefully she can have a safety chaperone at all times.