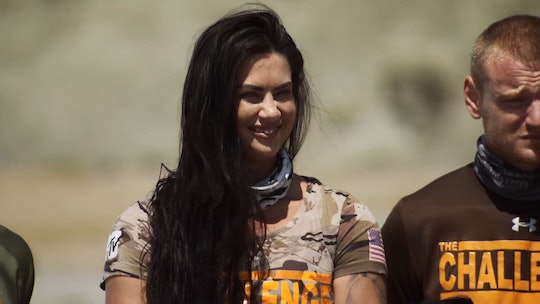 At the start of The Challenge Season 33, it looked like the veteran players had the advantage. Big names from past seasons like Johnny Bananas, CT, and Cara Maria were there to intimidate some of the rookies and it worked at first. Then, the rookies started picking off these epic vets and among the impressive rookies who are still left standing is Mattie. And the tweets about Mattie on The Challenge prove that she has fought hard for her place in the finals. She might not be one of the players who has proven herself in a past Challenge season, but she has shown her strength, loyalty, and encouragement of other players every step of the way.

Now, Mattie is one of the five rookies remaining out of the eight finalists and she has earned her spot through every ounce of sweat she shed this season. Mattie started out as Kyle’s partner and it immediately put her at a disadvantage. As a veteran player, Kyle already had enemies who were out for him. Since he was Mattie’s partner, she was caught in the crossfire more than once. But Mattie stuck up for him and remained loyal to him for as long as she could until she needed to focus on her own game.

Mattie might actually be one of the most noble players this season while also being one of the strongest, and Challenge fans on Twitter have taken notice.

Ahead of Season 33, MTV released some of the cast’s first reactions of Mattie and right away, they were threatened by her obvious strength. Cara Maria said that Mattie is like a hybrid of several past memorable competitors on The Challenge and Amanda called Mattie a "lean mean fighting machine." Judging by how far Mattie has come as a rookie, Amanda wasn't wrong.

In the same video, Jenna from this season of The Challenge called Mattie "one of the most intimidating girls in the house." Just by seeing Mattie compete, you can see that she has the physical strength to dominate almost anyone who goes up against her, but she also has a lot of heart and that’s part of the reason why so many fans are still rooting for her.

Before Mattie was brought on The Challenge, she was known for her role in Party Down South as a wild party girl with a penchant for bringing out her wild alter ego "Martha" after the right combination of alcoholic drinks. But on The Challenge, she showed that she can focus and give her all when the competition relies on her mental and physical endurance.

Even when Mattie was put on the Killing Floor, she dominated the competition and after that one time, no one challenged her in an elimination competition again. It says a lot about how the other players see her and how much effort she has put forth this season. Despite having a former reality TV reputation as a party girl, Mattie has proven that she is so much more than that and I wouldn't be surprised if she places in the top three in The Challenge finale.

Judging by Mattie’s Instagram, she has remained in top physical shape, so I wouldn't count her out of future seasons of The Challenge, especially considering how serious of a competitor she is. There are tons of photos of Mattie putting in work at the gym and if the goal is to ready herself for another Challenge season, then I would hope other future cast members are prepared. Even if Mattie doesn't take home the grand prize this season, she will go down as one of the strongest competitors the show has seen in a long time and this probably isn’t the last fans have seen of her.