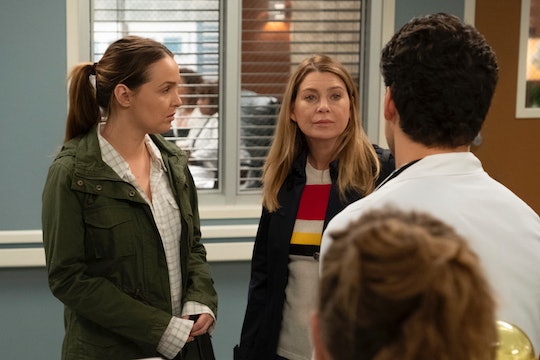 Ever since Jo met her birth mom on Grey's Anatomy, she has been in a deep depression and felt unable to open up to anyone about what happened. Tonight, however, Meredith finally got through to her and helped her talk about the trauma she suffered when she learned she was a product of rape. And the Twitter reactions to Meredith and Jo's conversation on Grey's Anatomy prove how important it was.

Almost everyone else close to Jo tried to get through to her at some point, but it was hard to know how to help her when Jo didn't feel comfortable telling any of them what happened when she met her birth mother. Leave it to Meredith to be able to relate her own pain and childhood trauma to Jo in order to help her see that she too is strong enough to move past it.

That doesn't mean Jo is magically cured of her depression, but it does mean that Jo is on the right track to getting professional help if that will help her the most in the long run. And it all started with Meredith refusing to budge. Now, Grey's Anatomy fans are collectively applauding her for helping Jo when it seemed like no one else could.

Meredith spoke to Jo about her own battle with depression and how she once wanted to give up and it showed how what Jo is going through is something much bigger than just "getting over" what she learned. It might be easy for some viewers to want Jo to tell Alex what happened and move on, but tonight's episode showed that it isn't that easy.

Meredith has been through her share of trauma in the past. She dealt with a difficult relationship with her mother, had plenty of ups and downs with Derek, then went through his eventual death, and a whole lot of drama in between. If anyone knows at least a portion of what Jo is feeling, it's Meredith. So it made sense that it was her of all people who finally got through to Jo.

Jo probably has a long road ahead of her, but she needed someone like Meredith to tell her that it's OK to feel the way she feels but to also figure out if she wants to get help or if she wants to drown in it. Since no one knew what Jo was going through, they didn't know to ask her such an important question. Meredith did and it helped Jo to realize that she needs to get actual help. Luckily, it looks like the talk worked and Grey's Anatomy fans are here for Meredith and Jo's conversation.

I don't know how Jo and Alex will move forward after this breakthrough, but she is definitely on the right track. If Meredith hadn't been so determined to get to the root of Jo's problem, things might have continued down the dark path Jo was on, so this was definitely the turning point Jo needed.

The last few episodes have been heartbreaking as Jo went from bad to worse as she struggled to come to terms with the truth about her conception. She told Meredith that she now feels as though everything bad in her life was punishment for the way she was conceived. Maybe it was important for her to say that out loud. If she hadn't opened up to Meredith like that, she might not have heard from someone else how wrong she was.

Jo is by no means OK after her conversation with Meredith on Grey's Anatomy tonight. She is, however, one step closer to getting the help she needs and that's a huge step after what she had been holding inside.