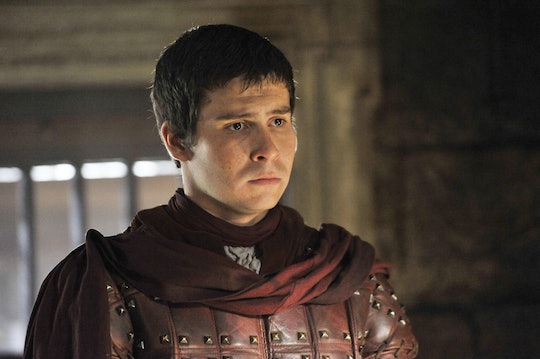 Twitter Reacts To Bronn & Podrick On ‘Game Of Thrones,' Says Exactly What You're Thinking

I know I know, the pairing of Brienne and Tormund has been the Season 6 dream pair fans have been loving on. But seeing Podrick and Bronn together again, this time not working on the same side but still amicable, was what we wanted before we even realized we wanted it. It's easy to forget that the two once served Tyrion together, but then again that was a lifetime (or, you know, a couple of seasons) ago. Brienne inherited the use of Podrick, and Bronn is now the BFF sidekick of Jaime, thanks to Tyrion.

So basically, seeing Podrick and Bronn back together on Game of Thrones elicited all sorts of love from fans via Twitter. If it isn't insisting that the two become the ones to outlive the rest on Game of Thrones, then it's the demand for a spin-off of Podrick and Bronn, getting into the sorts of hijinks that only someone with Bronn's attitude and Pod's, um, girth, can get into.

Although it's not hard to love Podrick since he's kind of never done anything wrong, it was still all sorts of adorable to see him reunited with an old friend to just screw around with while the grownups were talking. Of course, loving a pairing or even being attached to a Game of Thrones character is a death sentence, literally, for said character, but for now, let's just enjoy the love that Podrick and Bronn are getting from Twitter, OK?

Fans Said Exactly What We Were All Thinking

Proof That We Could Use Bronn And Podrick Fan Fiction

That's right, Bronn and Podrick are seriously the Game of Thrones odd couple that we've always needed. We may not ever get to see them together again since Westeros is huge and Brienne kind of has to make it back to Sansa to let her know that Riverun ain't gonna happen, but we'll always have Sunday's episode of Game of Thrones to remember the bromance and shenanigans that could have been. All we needed was Tyrion tossed into the mix and the three-some would've been back together and ready to drink together. I know, I know: I'll keep dreaming.