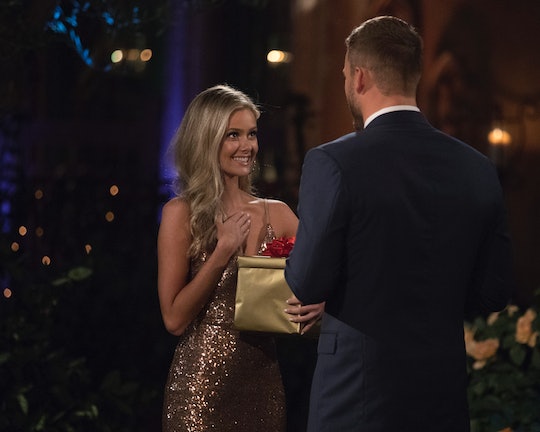 Hannah G. has stood out this season on The Bachelor for a few different reasons, including getting the first impression rose, making it to the final three, and, as if we could forget, freestyle rapping. Now, however, fans might remember her for a totally different reason that has nothing to do with the show. Twitter thinks Hannah G. on The Bachelor looks like Olivia Newton-John and she is the celebrity doppelganger viewers never knew they needed.

Hannah G. might be getting a little more attention now that she is part of Colton's final three, but viewers were already comparing her to the Grease actress at the beginning of the season. Before The Bachelor finale night, one fan even tweeted that Hannah G. looks like the actress's love child with Elton John. I mean, they aren't totally wrong in their assessment because Hannah G. definitely has a memorable face.

She could probably pass for someone like a young Mia Farrow or Twiggy too because she has a unique look that is a lot different than the typical Instagram star contestant we see each season. Unfortunately, given Colton's love for Cassie, Hannah G.'s resemblance to a celebrity is not going to get her a proposal at the end of this season. But that hasn't stopped fans from insisting that Hannah G. is Sandra Dee incarnate.

Bachelor fans on Twitter aren't the only ones who have noticed the resemblance. A few days ago, a fan on Reddit compared Hannah G. to Newton-John and although one fan replied that "Colton is definitely no Danny Zuko," most were inclined to agree.

Another fan on Reddit said that Hannah G. is the perfect combination of Newton-John and Reese Witherspoon and honestly, I can't un-see that either.

Hannah G. shamelessly freestyle rapping during her hometown date will go down as one of the most memorable moments of the season. And now that it has been established that she is Newton-John's doppelganger, some fans feel like she should have been singing one of the Grease songs instead. It would have been kind of perfect.

Newton-John isn't the first person Hannah G. has been compared to this season. She has already been likened to Barbie, Ariel (from The Little Mermaid), and yes, Reese Witherspoon. Maybe she looks like someone different for everyone. But there are definitely enough fans rallying behind her similarities to Grease's leading lady.

It's probably not the worst thing in the world to resemble an icon like Newton-John and Hannah G. has been one of the more low key and easy to like contestants this season. As in, she has been free of drama and has never really been in danger of being sent home. So if fans have collectively decided that she's basically an official celebrity doppelganger, I would think she'd embrace it. But right now, Hannah G. hasn't said anything about any of her many lookalikes.

Because Hannah G. was so likable this season, fans have felt almost protective of her. And although Colton made up his mind on The Bachelor and probably won't be the Danny Zuko to Hannah G.'s Sandra Dee, there is always the chance that she will find love on Bachelor in Paradise this summer. Luckily for Hannah G., she has gained enough fan support that having her heart broken this season may have been a little easier to handle and move on from. She has, after all, been one of the frontrunners for The Bachelorette.

Hopefully Hannah G. can move past The Bachelor and find love with someone else. Whether it's with someone on Bachelor in Paradise or not remains to be seen.