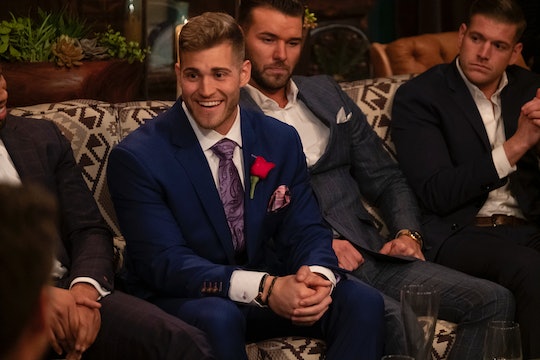 Luke P. On 'The Bachelorette' Is Basically Bradley Cooper In 'Wedding Crashers'

In tonight's episode of The Bachelorette, Luke P. proved that there is no limit to what he will do to get under the other guys' skin any chance he gets. During the rugby group date, his aggressive side showed big time and now, Twitter is comparing Luke P. to Bradley Cooper in Wedding Crashers. After the drama that ensued both on and off the field, it has been the comic relief that fans needed because Luke P.'s antics have made for some drama heavy episodes so far this season. And if he isn't going anywhere anytime soon, I don't see the Luke P. drama dying down.

In the movie, Cooper's character gets overly competitive during what is supposed to be a friendly family football game. But instead of keeping the aggression to a minimum, he acts like his nonexistent sports career depends on the game and he gets super into it. Luke P. followed a similar style in tonight's rugby group date and naturally, it got to some of the other guys. It also didn't go unnoticed by Bachelorette fans on Twitter, who won't soon forget the newest fictional character Luke P. reminds them of.

I know things can get highly competitive during those group dates on The Bachelorette, but Luke P. took it to another level.

It should also be noted that Cooper's character in Wedding Crashers was your stereotypical bad guy boyfriend type. It might be a little early to tell if Luke P.'s own intentions on The Bachelorette are impure, but it's hard not to see the similarities between the two of the, especially when it comes to football and rugby.

If you want to give Luke P. the benefit of the doubt, then maybe producers egged on his behavior. He was overly enthusiastic about the game from the tart and tried to get his teammates into a frenzy beforehand too. It didn't really work out, though, and Luke P. came across as far more aggressive than he needed to be in a group date rugby game.

Things went from bad to worse during the game when Luke P. seemed to channel his in-game aggression toward Luke S. After the game, Luke S. almost confronted Luke P., which would have made for even more drama with Luke P. at the center. At this point, though, it is becoming Luke P.'s *thing* to come across too strong in literally everything he does.

In the eyes of the other guys who participated in the rugby group date, Luke P. got way too physical with Luke S. But even before that, his possessive behavior with Hannah and aggression with some of the other guys had already turned them against him. Even if the rugby game hadn't happened, I'm sure the guys would have continued to get more fed up with him.

Right now, it looks like Luke P. is unconcerned with anyone's perception of him. And maybe he's right to disregard the other guys as long as Hannah is still into him. It's just going to make the next few weeks extra difficult for everyone and I know I wouldn't love the idea of needing to defend myself at every turn like Luke P. is going to have to do if he keeps up this kind of behavior.

Unfortunately for the other guys, it looks like Luke P. is here to stay. So if he reminded Twitter of one fictional jerk this week, chances are, he might channel another one next week without any concerns of being sent home. Eventually, Hannah might see through Luke P. and the game he seems to be playing, but for now, his behavior hasn't had many negative repercussions.