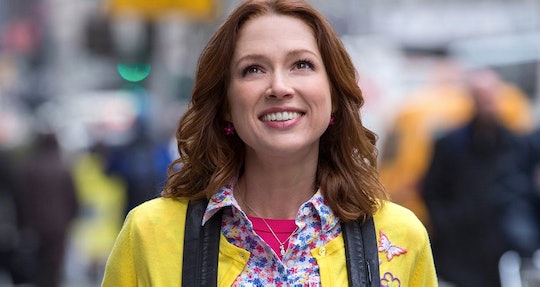 'Unbreakable Kimmy Schmidt' Season 1 Recap, Because A Lot Happened After The Bunker

Looking back on Season 1 of Unbreakable Kimmy Schmidt, for a comedy, there was actually a lot of character development and forward movement of the overall plot. And though I know I will miss Reverend Richard Wayne Gary Wayne, — because, Jon Hamm — the whole trial situation was more than necessary to move Kimmy's story forward, allowing her to become more than an Indiana Mole Woman. Plus, maybe we'll see Reverend Richard Wayne Gary Wayne again? I can totally picture him charming the guards into letting him out the front door of the prison. Season 2 finale, anyone?

But we wouldn't be true fans of all of her "kimbocile" moments if we didn't look back and recap Season 1 of Unbreakable Kimmy Schmidt. And though we have lost a few favorites, we'll always have Season 1 to remember them fondly.

Kimmy Emerges Into The World

After years below ground in a bunker, Kimmy and the other Indiana Mole Women emerge to discover the world is not filled with lakes of fire and whatever else the Reverend was promising them happened during the "apocalypse."

One of the best things about Season 1 of Unbreakable Kimmy Schmidt was Kimmy's interaction with Jacqueline and Xanthippe Voorhees. The Voorhees were a different species to the wide-eyed Kimmy Schmidt, so basically hilarity ensued during every interaction. The Voorhees, a disgustingly rich family in New York, seemed to adapt to Kimmy's eccentricities by the end of Season 1, even accept them.

Pretty much every scene with Dong ended up being gold — mostly because everything that comes out of that cute boy's mouth was sweet, funny, or a kind of perfect combination of both. As there is no current word on Kimmy's former love triangle participant and classmate returning for Season 2 of Unbreakable Kimmy Schmidt, let's just take a moment of silence for Dong and all the awesomeness he brought to the first season.

This is one of those random quotes from the show that you'll find yourself saying in even more random situations, and whether or not the person you're talking to gets it, you kind of have a private moment of fun with yourself at least. I mean, how else do you take this huge misunderstanding by poor Kimmy and turn it into something fun? This was, after all, Kimmy's first "boyfriend" out of the bunker. Mistaking Charles's gaming talk when he butt dials her to mean some modern day slang for "I love you", Kimmy takes the idea and runs with it.

Jacqueline Returns To Her Roots

After a season of Jacqueline being a bit one-noted, we learn that she comes from a Native American family that she, as a teenager, wants almost nothing to do with. Her fix was getting colored contacts and dying her hair that perfect blonde shade.

If you didn't already love Titus Andromedon up until this point, his "Peeno Noir" song and music video probably brought his lovability up over the edge for you. And rightfully so. I would be lying if I said that I didn't, on any random day, start singing a few lines of his original and downright fun song. It's also pretty miraculous how he ended up pulling it off to look actually good. As per usual, go Titus.

Reverend Richard Wayne Gary Wayne would have been so much worse of a villain in Unbreakable Kimmy Schmidt if he hadn't been played by Jon Hamm. He played the part so well, making this monster of a man into the most hilarious wannabe cult leader. By the end of the first season of Kimmy Schmidt, he is found guilty of his crimes and sent away to prison, which OK, was well deserved.