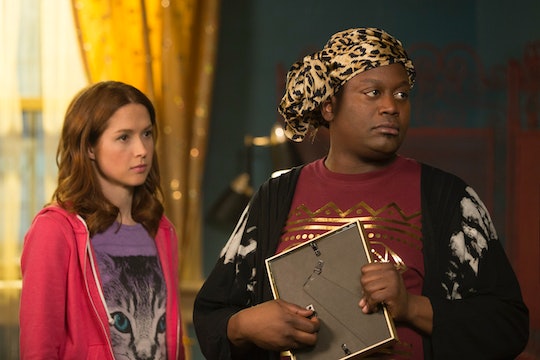 Some shows are so funny and full of hidden gems that they’re almost better watched the second time around, and with Unbreakdable Kimmy Schmidt it’s no different. Basically everything that comes out of the characters’ mouths tends to be jokes of some kind, so the episodes are always worth a rewatch or two. That being said, it’s definitely worth indulging in an Unbreakable Kimmy Schmidt Season 2 recap, because much like Season 1, a lot actually happened throughout the 13 episodes that may cause for a quick refresher.

The series is a sitcom of sorts at heart, but it also follows Kimmy’s life as she struggles to get ahold on society in general and actually live in the modern world. (You know, since she spent a great chunk of her life in the reverend's bunker.) Everything that happened on Unbreakable Kimmy Schmidt Season 2 won’t necessarily be revisited for the upcoming Season 3, but so much happened to each character that some of it is bound to come up again in big ways. Like Lillian’s possible run for local office or Jacqueline's relationship with Russ.

The topic of Kimmy’s mom probably won't be brought back, thanks to the closure she got with her absentee roller coaster enthusiast mom played by Lisa Kudrow, but I don’t think we really need to see that heartbreak anymore, so I’m totally good on that. Still, there was so much that happened during Season 2 of Unbreakable Kimmy Schmidt that a recap is kind of the only way to get ready for Season 3 unless you’re prepared to do a whole rewatch. So without further adieu, here are the most important takeaways from the second season...

Like, seemingly for good this time. Even though they finally had sex in the back of a cop car, the last we saw of Dong, he was either going to be deported or have to finally stay away from Kimmy and stay with Sonja, the classmate who’d married him to help him stay in the country. Either way, that was the last we saw of him for Season 2.

Kimmy Got A New Job

Though she was still driving with a learner’s permit, apparently the version of Uber on Unbreakable Kimmy Schmidt doesn’t require an actual license. But Kimmy finally got a job that wasn’t centered around Jacquline or her problems, so yay Kimmy.

She Also Finally Dealt With Some Of Her Issues

Even though it looks like her time with the amazing therapist Andrea, played by the even more amazing Tina Fey, is over, Kimmy seemed to work through her issues following her kidnapping. Obviously she still has a lot of healing to do, but in the end, she seems to have made some progress. Now, maybe Fey can return for Season 3 as another caricature-type of character.

Titus May Have Passed Up A Career Opportunity

Titus got the chance to perform on a several month long boat cruise, but on the way he continued to be conflicted about it and his feelings for Mikey, so he stopped off in Titusville, Florida, hoping that it was a sign to point him in the right direction. It turned out it wasn’t, like at all. But it also means he may have been too late to make it to his newest gig.

Kimmy Got Her GED

Somehow between trying to help Dong not get deported and being Jacqueline's errand girl, Kimmy managed to get her GED. So that promo for Season 3 which shows her at college totally makes sense.

Even though part of her will obviously always be the clueless Manhattan socialite we’ve come to know and love, Jacqueline started to care more about her Native American heritage and a little less about what everyone else thinks of her. She also seemed to be falling for Russ for more than his money, which is another huge step for her.

Despite being chained to a bulldozer, the construction in the neighborhood proceeded and Lillian faced the reality of gentrification in the area. But just as she was about to give up and sell the house, she was visited by a guy from I.S.U.S. (the Interborough Society for Urban Settlement) about running for office, given her devotion to preserving the neighborhood. And she actually seemed totally into the idea.

Obviously a lot happened last season, but with these helpful reminders you'll be able to start your Season 3 watching with ease.