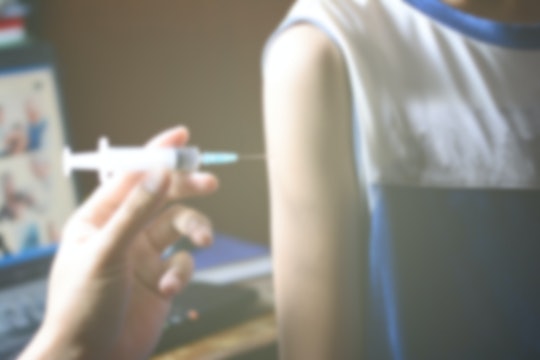 It might seem like this year has flown by, but it really is already flu season in the United States, and unfortunately, the illness has already taken a tragic toll on at least one family. As CNN reported on Tuesday, an unvaccinated child has died from the flu, and they are considered the first child in Florida to die of flu this season. And the child's death is already prompting professionals in the medical field to warn parents of the dangers of the flu and the benefits of getting your whole family their flu shots ASAP.

On Tuesday, CNN reported that the Florida child died as a result of flu-related illness during the week ending Oct. 6. The state's Department of Health reported that, although influenza activity remained at low levels across the state, one new influenza-associated pediatric death was reported in a tragic start to the flu season.

The Centers for Disease Control and Prevention reported that the "timing and duration" of the flu season can vary, and that influenza activity usually starts to increase in October even though most flu activity peaks between December and February. Flu activity can last as late as May, but parents everywhere should consider looking into flu shots now.

Not only was this the first pediatric death of the flu season in Florida, it's also the first influenza-related pediatric death in the United States this season, The New York Times reported on Tuesday. Health officials did not release details about the child including their age, gender, or where they were located in Florida, but reported that the child didn't have an underlying medical condition and had not received the flu vaccine, according to USA Today.

Now, health officials are reacting to the news by urging parents to get their children a flu shot sooner rather than later. For example, Dr. Tara Narula told CBS This Morning, according to CBS News:

What this is a strong clear message to parents about the importance of vaccination. This vaccine is safe. It is the most effective tool we have. And we know of the pediatric deaths last year, 80 percent were in kids who were unvaccinated.

And Lynnette Brammer, leader of the US Centers for Disease Control and Protection's Domestic Influenza Surveillance team, told CNN that "Basically, everybody 6 months of age and older should get vaccinated." She added, "If you're pregnant get vaccinated, because it will protect you and it will help protect your baby when the baby's born."

Indeed, there are a number of reasons to get the flu shot while pregnant, and medical professionals generally advocate flu vaccines for pregnant women. And as for kids who are 6 months or older, studies have shown that the flu vaccination is safe for kids, and the flu vaccine is a good preventative measure for all families to consider, according to Kids Health.

As PopSugar reported, 183 children and 80,000 Americans died from the flu last season. The fact that one child already died and it's just the start of this flu season is a scary reminder that it can happen to any child, but unvaccinated children are especially at risk.

One of the reasons some parents might choose not to get flu vaccinations for their kids in spite of those numbers is the false belief that vaccines cause autism spectrum disorder (ASD). The CDC reported, unequivocally, that there is no link between vaccines and autism, but the dangerous myth persists.

It's unfortunately too late for the child who passed away in Florida as a result of flu-related illness, but parents everywhere can take the best step available to them to up their child's chances of not getting the flu by getting them the flu vaccination ASAP. The CDC even offers a flu vaccine locator, in case you don't know where to go.