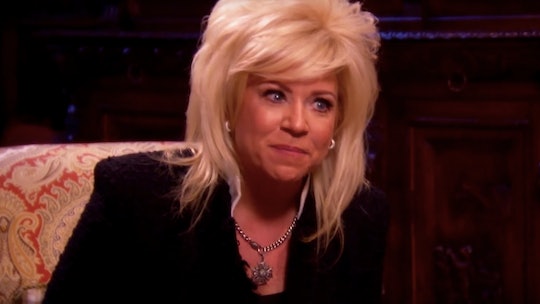 What sets Long Island Medium apart from some similar TV shows is that medium Theresa Caputo also allows viewers to see into her personal life while she works with clients to reconnect with their lost loved ones. But as fans have seen on the most recent season, things haven't been going well in her marriage and as a result, she split with her husband of 28 years, Larry Caputo. Despite their marital difficulties, though, the updates on Theresa Caputo’s marriage show that the Long Island Medium star is adjusting to their separation.

Although much of the couple’s legal separation is going to play out in the season ahead, Theresa recently spoke with Extra about the status of her relationship with Larry and any update on what they've been going through, both as a couple and now apart from each other. "Right now, Larry is living in L.A. and I'm here in New York," she revealed. "We're just taking it day by day." Theresa also said that despite everything, she's "doing okay."

Back in December 2017, they released a joint statement to People that announced their legal separation and said, "We will always love each other and our two wonderful children… We are united in supporting each other and our family." While it may have come as a shock to some fans, others probably remembered seeing Larry admit on Long Island Medium that things weren't going to well in the marriage during a December 2017 episode.

During the show, both Theresa and Larry have mentioned at different times that the cause of their separation had to do with simply growing apart and being unable to reconnect, as hard as that may have been to finally face. As far as a possible reconciliation goes, right now it seems unlikely since they're currently residing in separate sides of the country. Theresa is also still currently on tour, so that likely helps in distraction her from the separation.

During a Season 10 episode of Long Island Medium, Larry was open with a friend about his split from Theresa and admitted that up until that point, it had already been difficult to handle. "It’s like losing your best friend. It’s hard," he said on the show. "As much as I try to busy myself so I’m not thinking about it, it’s still there. I know it’s very trying for the both of us. I don’t want to make it just about me. I know it’s the same for Theresa also." At the time, he also said on the show that he didn’t know what the separation would mean for their relationship in the long run, so it's clearly been a difficult adjustment for them both.

Fans can probably expect the couple to continue to be open about their relationship for the newest season of Long Island Medium. One thing that Theresa has never shied away from is being herself and remaining totally open and honest about her personal life, so it’s not all that surprising that she’s chosen to do so with this aspect of her personal life as well.

For right now, Theresa and Larry are living apart from each other and have legally separated. Neither have publicly mentioned getting back together in the near future, so if you're hoping to see them make amends by the end of the season, you may end up being disappointed. They do, however, seem to be on great terms with one another, so they could still end up coming out of this as close friends.