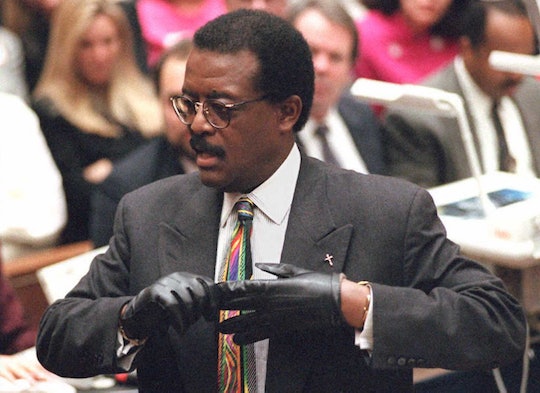 Video Of Johnnie Cochran At The Real O.J. Simpson Trial Is Super Intense

The People v. OJ Simpson: American Crime Story has been on for three weeks now and the show is just now digging into the meat of the trial of O.J. Simpson for the murders of Nicole Brown Simpson and Ronald Goldman. There has been a lot of talk about the different portrayals in the show such as those of the Kardashian family and Sarah Paulson's kick ass portrayal of Marcia Clark. What some people tend to forget, however, is that this trial was once televised. And before the actors, there were the real people in real roles just trying to do their job. That is why videos of Johnnie Cochran at the real O.J. Trials are a super intense.

Cochran was a lawyer for many high-profile celebrities like actor Todd Bridges and musician Michael Jackson before he went on to defend Simpson in 1994. One of the most memorable things to come from the Cochran's work on the Simpson trials was the line, "If it does not fit, you must acquit" which was spoken by Cochran in reference to the glove that Simpson tried on at the urging of the defense.

The video taken from the courtroom of the trials shows Cochran giving his closing arguments to jury. You can see why the jury was so enraptured by him. You can feel the tension in the courtroom and hear the drama in his voice. While he may not be a Dean Strang or a Jerry Buting, he is definitely a talented lawyer and it shows just from the videos you can find on the Internet.

Courtney B. Vance, who plays Cochran on The People v. OJ Simpson, bears a striking resemblance to Cochran and has already received praise from critics for his performance and portrayal of the late lawyer. Cochran, who died from a brain tumor in 2005, went on to continue to practice law after the trial. He defended P. Diddy in 1999 and wrote two books, Journey to Justice and A Lawyer's Life.

A movie about Cochran in also reportedly in the works. According to The Hollywood Reporter, the film will focus on Cochran and his decision to take on the case of Ron Settles in 1981 as a young lawyer.

It is great to see Cochran's legacy as a lawyer live on and be immortalized in television and on the big screen.