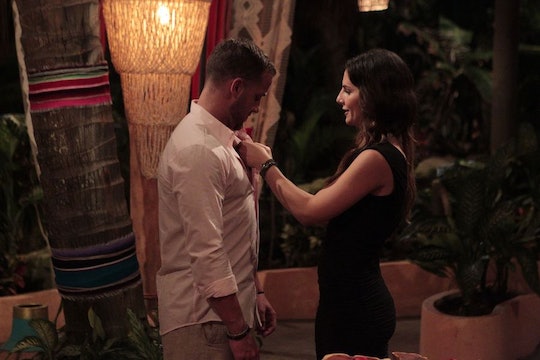 Of all of the couples this season on Bachelor in Paradise, it has been the general consensus that Izzy and Vinny were one of the strongest pairs. So to see them fall so hard after Izzy revealed that she had doubts and wanted to pursue Brett was rough for us all. So when Vinny left Bachelor in Paradise Tuesday night, Twitter was also understandably heartbroken. They made up Vizzy, the normal and down to earth couple of Bachelor in Paradise who seemed like they would actually last well beyond the final rose ceremony. They weren't about noisy make-out sessions or being indecisive with each other — they were just the most normal seeming and real couple we needed.

Now that Vinny left Bachelor in Paradise, Izzy's own future is still uncertain. She might have broken things off because she was interested in Brett, a.k.a. lamp guy from Season 10 of The Bachelorette, but who knows where that will even lead for either of them. I might be biased, because I was heavily into Vizzy, putting everything into them as a couple on Bachelor in Paradise, but seeing Vinny give up and go home was just too much.

It's not even that we all hate Izzy now, though I'm sure it wouldn't be hard to find anyone who is holding a real grudge for the heartbreaker at the moment, but it's more that no one can handle seeing Vinny, the barber from Florida, break down and be so heartbroken that he feels the need to leave Bachelor in Paradise. If it wasn't enough that Izzy and Vinny broke up, it had to be one of the saddest scenes yet this season.

Now, one of the strongest and most normal couples on Bachelor in Paradise is the most unlikely couple at the beginning, Evan and Carly. Of course Caila and Jared are a close second as the couple who won the date card from Jade and Tanner on Tuesday's episode, but losing Vinny and Izzy as a couple and then Vinny leaving Bachelor in Paradise leaves things a little uncertain as far as strong couples go as of right now.

OK, so maybe they were only together for like two or three weeks in reality, but when all you have to do is go on dates with each other and lay around on various beach chairs that are the size of king beds, you get close fast.

I think we all have every right to take a few minutes to mourn the loss of Vinny on Bachelor in Paradise and Vinny and Izzy as a couple. But it does give us the chance to focus on some of the other couples, and hopefully root for them rather than plan for their downfalls after losing Vinny.