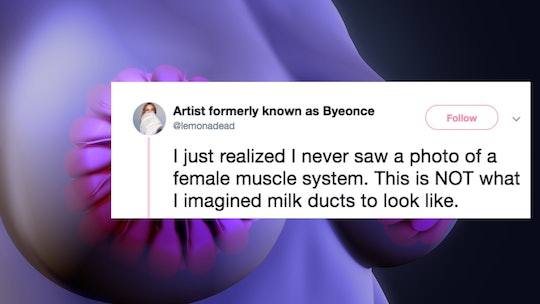 Many of us have spent biology class poring over the textbook and gawking at human anatomy. But it seems we all missed the coolest part— breasts! In fact, a viral photo of milk ducts shared on Twitter is totally blowing people’s minds as many are seeing the intricate beauty and power hidden inside breasts for the first time.

The female milk ducts, reminiscent of flowers in their appearance, are mainly responsible for transporting (not storing) breast milk through their network of tiny tubes that eventually exits the skin through the nipple. They are a part of the specialized tissue in the breast that produces milk as well as fatty tissue. According to the University of Western Australia, the complex ductal anatomy is similar in each breast but can vary greatly from woman to woman.

And they are also not always arranged in a radial or symmetrical pattern, as shown in the viral post.

The viral photo of the intricate female ductal network has elicited a variety of reactions, ranging from utterly shocked to fully impressed, from social media users.

“No I really didn't need to see this, hmmm the trauma!” one Twitter user posted in the comments. Another commenter expressed her surprise, exclaiming, “I DONT WANT BREASTS ANYMORE.”

Some social media users attributed the discomforted reactions to patriarchy permeating academia and the sciences. “Maybe it’s only freaking people out because it’s not normalized because of the patriarchy showing us a man’s biology in class,” a Twitter user suggested.

“Woah, I must of learned what breasts look like by studying men’s breasts, cause this is BRAND NEW,” another user agreed. “I am thinking hard about patriarchy and our educational system. I should not be this old and making discoveries about my own body over Twitter.”

While some hoped to “unsee” the viral photo, some mothers expressed their appreciation for the post. “It’s beautiful to me — I breastfed my kids and wow! Those things nourished my babies,” a mom commented.

In the past, some celebrities have even come out and shared stories about their own milk ducts. Celebrities including Kristen Bell and Kristin Cavallari have been open about their experiences with their ducts while breastfeeding — both mothers shared stories about how their husbands had to help clear their clogged ducts, a condition that can lead to pain or swelling in breasts and slower milk flow, by sucking on their breasts. "I knew that it was gonna be a little controversial," Cavallari told E! News at the time. "I didn’t know that it would be as big as it has become."

With campaigns like Free the Nipple and others already pushing for the normalization of the female body and breastfeeding, this added viral post only goes to show just how unique and intricate the female body can be.

More Like This
Can You Breastfeed After A Breast Lift? Experts Explain
If Breastfeeding Makes You Tired, Here’s How To Keep Your Energy Up
There’s A Reason Your Baby Always Falls Asleep While Breastfeeding
Kylie Jenner Is Unbothered By A Little Breast Milk Leaking On Her T-Shirt