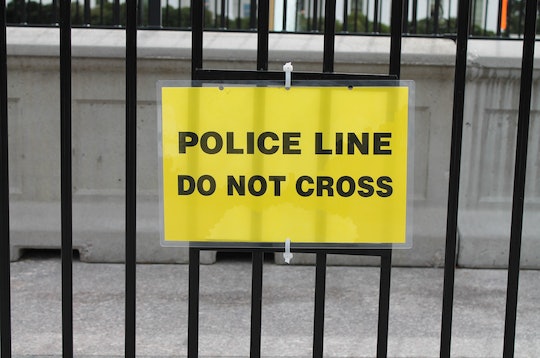 Was The San Bernardino Shooting Terrorism? Yes, & It's Only Getting Worse

Update: According to officials, two of the suspected San Bernardino shooters are dead following a shoot-out with police, and one of the suspected shooters is a female. Late Wednesday authorities identified the suspects killed as Syed Farook and Tashfeen Malik, the woman, and said they had been in a relationship. Farook was a U.S. citizen and an employee of the of the San Bernardino County Health Department. Further details about Malik are not yet known. Police also detained a third individual at the scene, but it's unclear whether or not that person is connected to the shooting at the Inland Regional Center (where officials say they might have found an explosive device). Also, FBI officials are not confirming whether or not the organization considers the shooting terrorism.

Earlier: On Wednesday, reports trickled in of a shooting taking place in San Bernardino, California. Upwards of 14 people have been killed, and 17 more have been injured and sent to local area hospitals. Police confirm that up to three people opened fire inside the Inland Regional Center, and two suspects have been confirmed currently "down." In an era of gun violence that's become much too commonplace, one question was front and center: Was the San Bernardino Shooting terrorism? Like the attack that happened on Black Friday in Colorado, when Robert Lewis Dear allegedly entered a Colorado Springs Planned Parenthood, killing three and engaging police in an hours-long shoot-out, or the attack that took place in Moneta, VA, when Vester Flannegan (known as Bryce Williams), reportedly killed his two colleagues and then took his own life, or Aurora, or Newtown, Americans are now faced with the question lurking behind every corner and every public space: Is gun violence an act of terrorism in the United States?

In order to answer that, you have to look at what terrorism means. The United States Department of Defense defines terrorism as:

The FBI defines terrorism according to three different principles. Domestic terrorism, in the eyes of the FBI, means that "involves acts dangerous to human life that violate federal or state law; appear intended to intimidate or coerce a civilian population; to influence the policy of a government by intimidation or coercion; or to affect the conduct of a government by mass destruction, assassination. or kidnapping; and occur primarily within the territorial jurisdiction of the U.S." So by that definition alone, it seems only safe to say that yes, what's happening in San Bernardino right now is an act of domestic terrorism.

So much time is spent discussing Syrian refugees and ISIS and the threats abroad. But what about the threats at home?

Gun violence in America is an act of domestic terrorism. It's not to say that gun owners are in the wrong. It's not to say that people who believe their should be no guns at all are right. It's not terrorism in the way we traditionally define it. It isn't men from other cultures boarding planes and bombing our buildings. It's here, in our own backyards, in our own schools and movie theaters, and healthcare facilities. It's here.

Today, according to police, the shooting took place near the Inland Regional Center, which serves people with development disabilities run by the state, according to Reuters. To date, ShootingTracker.com has tracked 351 shootings in the United States since 2015 began. If the site's facts and figures are correct, that would mean that today would make 352.

None of us — gun owners and gun adversaries alike — want to live in a world where our loved ones are constantly at risk. None of us want to leave not knowing that the possibility of coming home may not be available to us.

Because details and information are steadily trickling in, it's still too soon for police and federal organizations to call what happened today in San Bernardino a terrorist attack. According to the New York Times, David Bowdich, the Assistant Director of the FBI's Los Angeles office, told officials, “We do not know if this is a terrorist incident. Adding that officials have said the shooters dressed in equipment that may have suggested "they were prepared." Two of the shooters have since been caught, one of whom is a woman.

Jarrod Burguan, chief of the San Bernardino Police Department added, "We have no information at this point to indicate this is terrorist related in the sense that people may have been thinking." However he did call the shooting an act of "domestic terrorism."

So much time is spent discussing Syrian refugees and ISIS and the threats abroad. But what about the threats at home? We promise time and time again that "this doesn't happen in the United States," but it happens here. It. Happens. Here. It happened just last week. And as much as it makes me sick to say it: There's a very good chance it could happen next week. So before we turn away refugees literally fleeing the very violence of their own domestic terrorists, we should turn inward. What are we doing to stop terrorism? Maybe we don't need to protect our borders. Maybe what we should be doing is protecting our own families.

We should call it what it is: Domestic terrorism. And we should keep calling it that — we should shriek it until we're heard — because maybe then we'll finally do something about it.