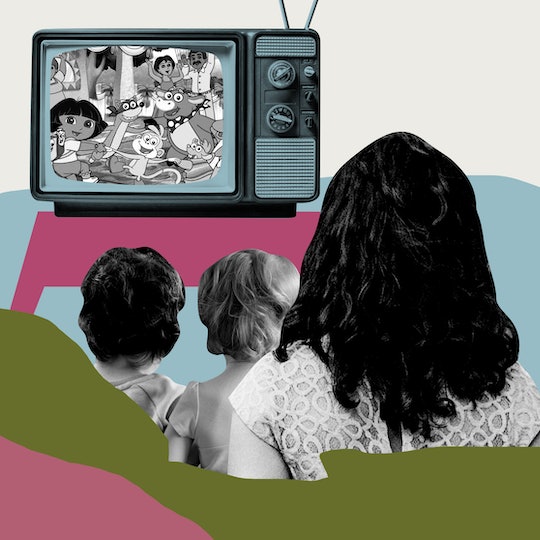 When I muse on all the things I thought I'd "never do" as a parent (before having children or a clue) sitting in front of the television screen for hours at a time with my offspring was high on the list. Much like pacifiers and bed-sharing, I'd read enough hot takes on the dangers of screen time to be wary of becoming an "iPad parent." One hot take I never read, however, was how television might actually help me preserve my Latinx heritage for my daughters, and myself. Three years into motherhood, that's precisely what it's done.

After moving to the UK from the States, where my closest Spanish-speaking, Colombian relatives still reside, I started to feel my culture slip from my grasp. With no one other than pre-verbal infants to speak Spanish to, I realized that I was losing my vocabulary only months into this new life. I'd be talking to my infant, trying to speak Spanish to her as much as possible, and suddenly I'd forget the word for "blueberry," "bucket," or "cabinet."

Without necessarily meaning to, I found myself playing my daughters English music more often than anything by Spanish artists. This happened first with Luna, who was born shortly after I moved overseas, and then again with Elia, who arrived 19 months later. I slipped into English conversation with them because that's what I was hearing all around me. I accepted that I probably wasn't going to meet many people (if any at all) from Spanish-speaking countries, and began resigning myself to the idea that my kids might not be fluent in the language my mother and older brother made sure I learned, despite not raising me in the country of their birth.

Then something pretty marvelous happened. My kids got old enough to have an actual attention span. At 3 and a half, Luna learned to sit through full-length television shows and films. Via the wonders of modern technology (a.k.a. the "audio" selection tab on streaming sites like Netflix and Disney Plus), I found a way to immerse both girls into the Spanish language with the actual click of a button.

In the moments before Moana gets her foot stuck under a rock, my youngest will grab me and say, "Moana, chichón, en pie," ("Moana, bang, on foot") to warn me about what is to come.

I feel grateful that most all of the de rigueur Disney films of the moment have Latinamerican-Spanish translations on Disney Plus. Now, instead of "Let it Go," my eldest will often sing "Suéltalo" at the top of her lungs in the backseat of the car. In the moments before Moana gets her foot stuck under a rock, my youngest will grab me and say, "Moana, chichón, en pie," ("Moana, bang, on foot") to warn me about what is to come. We can watch Coco, with its rich cultural visuals, as I personally feel it was meant to be watched: in Spanish.

My daughters can try to emulate Fortuna Esperanza Navarro "Lucky" Prescott, the Mexican-American protagonist of Spirit Riding Free, on their own rocking horse, saying, "Vamos Spirit!" as they ride off on imaginary adventures. They ask me questions about Vida from Super Monsters, who introduces her classmates to Dia de los Muertos. They can learn about the holiday through the Spanish words they hear in the translated version. I know that I'll always remember the first time my eldest sang "Viento y Cielo Alcanzar" instead of "Touch the Sky" from Brave. I might have shed a tear (or 50).

When we watch Dora la Exploradora (rather than Dora the Explorer), I'm taken back to my own childhood — when I'd watch the series with my cousins on too-hot summer days in Medellin — and can actually picture a day in which I take my own kids to Colombia. Maybe when I do, they'll be able to stand on their own two feet. They'll be able to communicate with that same cousin who is there in so many of my memories from home.

The same is even true of Lizzie McGuire, which my eldest surprisingly loves despite it being quite a tween-oriented show. She especially appreciates Miranda Sanchez (a Mexican-American character). "Me encanta su pelo," Luna will often tell me, remarking on Miranda's fabulous hairstyling abilities. Or, "Mira la muñequita," she'll say, meaning, "Look at the little doll" (her term for the animated version of Lizzie that pops up through each episode).

My children may only be a quarter Colombian, but they help me feel closer to my roots than I have in years. They remind me that this part of my identity isn't one I have to sacrifice just because I'm an ocean away from the people who preserved it in my own upbringing.

These moments — those in which my daughters mimic the language of the characters on screen, ask questions that relate to my own heritage in some way, or remark on what we are watching in the language we are watching it in — are almost too special to describe. My children may only be a quarter Colombian, but they help me feel closer to my roots than I have in years. They remind me that this part of my identity isn't one I have to sacrifice just because I'm an ocean away from the people who preserved it in my own upbringing.

Seeing their Spanish take off, just as I was beginning to fear it never would, has inspired me to ensure I'm incorporating the language and culture into other areas in our lives. They might love the sounds of Lady Gaga and Fleetwood Mac, but now they listen to those of Shakira, Juanes, and La Oreja De Van Gogh just as regularly. They might adore every piece of writing Julia Donaldson has ever created for children, but I now try to get every new addition to our collection in Spanish. We've even made it a point to try to find Spanish speakers near us. Contrary to my initial doubts, there actually are quite a few Hispanic families in town — some of whom even have kids of a similar age to mine.

For now, we'll keep watching all the translated versions of the shows and movies they adore. I know that if we keep it up, the day will come when I can introduce them to their own summers in Medellin; when they'll slip into life there seamlessly because they can communicate with the people around them. With their family; their culture.