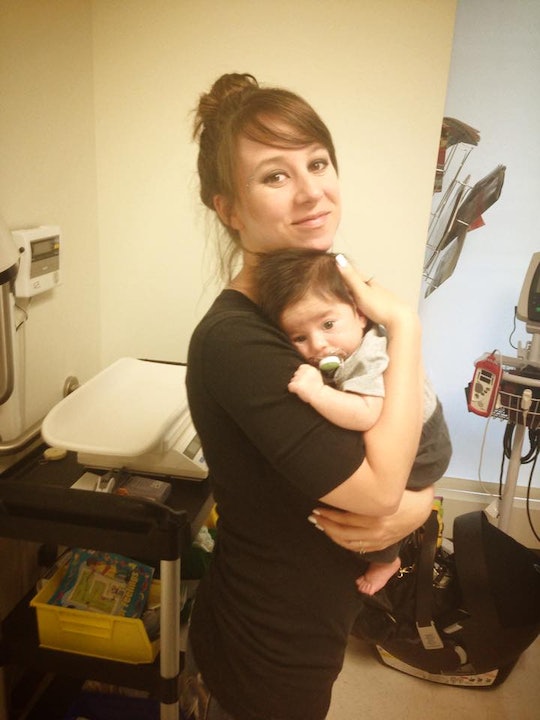 We Need To Start Talking About Purple Butterfly Babies

My son has multiple names. Matthias. Boo Bear. Boo. Boo Bear the Poo Bear. Bug. Bugaboo. Sweet pea. Bugga Bugga Boo Bear. Sweetheart. Love. I have never, however, referred to my son as a purple butterfly baby, even though that's what he is. If I'm honest with myself, I have to admit that remembering my son was actually a twin is painful, and I'd rather shove that pain to the darkest corner of my mind. But before there was one there were two, and I think it's time we start acknowleding this very specific kind of loss that so many parents endure. Starting with me.

In 2016 Millie Smith gave birth to two identical twins when she was 30 weeks pregnant. Sadly, one of her twins, Skye, passed away just hours later. While in the hospital another mom of twins, unaware of Smith's situation, told the new and grieving mother that she was "so lucky" she didn't have twins. But she did. She was a twin mom, and in the moments that followed Smith decided to come up with a way to let people know that some moms with babies in the hospital are still mourning losses, too.

According to US Weekly, Smith created "purple butterfly stickers for NICUs to help identify when a baby has survived the death of one or more multiple-birth siblings." In 2016 the family raised over £4,000 to help bring the butterfly stickers to NICUs and hospitals around the world. "I chose butterflies because as I felt it was fitting to remember the babies that flew away,” Smith told US Weekly. “Purple because it is suitable for both boys or girls.”

My son didn't have to visit the NICU after he was born, and there was no purple butterfly posted in our postpartum recovery room or on his cot. In fact, he was perfectly healthy when he was born and I was able to, thankfully, carry him to term. But I lost his twin brother at 19 weeks gestation, suddenly and without warning. One moment there were two healthy heartbeats and I was buying matching onesies, and the next moment there was only one heartbeat and I was giving one set of onesies away.

I had one child. One healthy, perfect child. That should've been enough for me, right?

My son's birth went according to plan: I was able to have him vaginally after 20 hours of labor and three hours of pushing, I was surrounded by attentive and caring doctors and nurses who listened to my needs and wants and respected them without question, and there was minimal tearing (a godsend, I can assure you). There was just one problem, though, and it loomed over the entire birthing process: I as giving birth to a twin that was alive, and a twin that wasn't. I was supposed to go home with two babies and, instead, I knew walking into that hospital that I was only going to walk out with one.

I didn't look at the remains of the twin I lost once I had pushed him out of my body. I didn't speak about how difficult it was to be a new mother and a loss mother simultaneously; to feel incredible joy and intense sadness all at once; to have no idea how to process the arrival of one child and the inescapable reality that there should've been two. As painful as it is to admit now, I didn't feel like I had the right to. I had one child. One healthy, perfect child. That should've been enough for me, right?

Some days my son felt like enough. Other days I felt a gaping whole where another twin should have been. I would look at moms with two babies and an intense yearning would render me useless. I would hear moms say, "I can't imagine being a mom of twins," and think, "I can. I imagine it all the time." I would hear about how lucky I was to "at least have one" and while that statement was undeniably true, it also erased the pain I felt. I just had no idea how to articulate living in a sate of limbo — of being suspended between complete joy and overwhelming sorrow — to those who weren't also living in that painful space with me.

I was a mom who gained a baby and said goodbye to a baby on the very same day.

As a culture, we like to think of most things in the extreme. Everything is black and white, bad or good, fair or unfair, including loss. But loss isn't an "all or nothing" experience, in that we can experience loss and gain simultaneously and usually do throughout our lives. When my son was born I was also faced with a loss I could no longer pretend didn't exist: he was outside of my body, alive, and another twin was outside of my body, dead. I couldn't escape it, or wish it away, or pretend I was living someone else's life and eventually I would wake up pregnant with two healthy, growing twins. I was a mom who gained a baby and said goodbye to a baby on the very same day. I was a mom who wanted to celebrate and mourn. And I was also a mom who deserved to exist in a space that allowed her to feel all of those feeling simultaneously, without shame, and without apology.

Which is why I think it's important to make room for purple butterfly babies when we, as a society and certainly as parents, discuss pregnancy and infant loss. A mom who has lost one child, but is able to hold another, is still hurting. A mom who will take one baby home, but not all of her babies home, is still in pain. And if it truly does take a village to get through all that parenting throws our way, then we must extend our village to moms of purple butterfly babies, too.