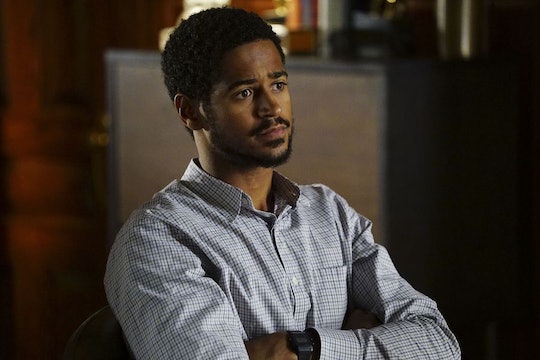 Fans have been waiting since the Season 3 premiere to find out who's dead and Thursday night's winter finale finally revealed that Wes was under the sheet on How To Get Away With Murder. It was between Frank and Nate for a couple of weeks (or so many people thought), so the big reveal was more shocking than either of those options could have been. Losing a main player on HTGAWM is never easy, but until now there hasn't been a loss of this magnitude.

Sure, Rebecca was killed after knowing her for a while and Sam's death was a little bit of a shocker, but both of them were never meant to stick around. Personally, I believed that Wes was going to be on the series for the long haul and was an even more prominent player than most of the Keating Five. So it's hard not to want to take a few moments to remember the character who never really had a chance, once it came down to it.

No one ever really believed that one of Annalise's favorite students would be under the sheet, but that never stopped viewers from worrying about each and every of them as the season progressed. And now that it was revealed that Wes is the one that's a goner, what does this mean for the remainder of the season? If Season 3 is to play out like the first two seasons, then there will be a whole other mess to deal with, come the return of HTGAWM on Jan. 19. And in this case, that mess will boil down to one simple question: who killed Wes?

Understandably, there is a mixture of emotions raging on Twitter right now. Some are still mourning the loss of literally the most morally stable person on the show, and others are angry. And now that Wes is dead, there is a gaping hole in Annalise's life and everyone knows that she doesn't handle loss like this too well. Her reaction at seeing his body under the sheet was earth shattering, so think about how this is going to affect her once the show returns.

The biggest shock, next to Wes being the person under the sheet, was the fact that he was dead before the house fire even happened, so someone had it in for Wes enough to not only kill him, but then plant his body in Annalise's house. Was it to eventually frame her? Or did the killer plan to set the house on fire regardless? Unfortunately, viewers have about nine weeks until they find out.