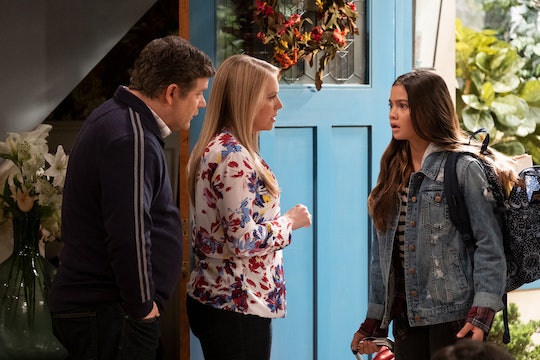 'No Good Nick' On Netflix Is Like 'Revenge' For Kids

If you’ve been looking for the middle ground between Pinky Malinky and Santa Clarita Diet so you can enjoy some quality family programming on Netflix, then No Good Nick might be for you. It’s probably not as innocent as the content you’d find for tweens on the Disney Channel, but it does offer a mysterious storyline without all of the adult situations. The show is actually rated TV-PG, so the ages of kids that should watch No Good Nick vary.

The PG rating means that most kids can watch and understand the show with an adult present. There could be some language that teeters on vulgar from time to time, but for the most part, school-aged kids should be fine as long as parents are watching No Good Nick with them. The show probably isn't for those younger than 10 or so, but in this case, it’s totally up to the parent’s discretion. TV shows that are rated PG might sometimes show suggestive situations or scenarios, but there’s unlikely to be any four-letter swear words and definitely not any nudity. In other words, use your best judgment, but for most families, No Good Nick is best watched with older kids and parents at the same time.

No Good Nick is kind of like Revenge for younger viewers. Like ABC’s Revenge, No Good Nick is about a mysterious young girl who inserts herself in a seemingly perfect family, claiming to be a distant relative. Obviously all is not what is seems and, as the title of the show suggests, she’s up to no good as a new member of the family. It’s a far cry from enjoying Fuller House or the One Day at a Time reboot with your kids, but that’s why it’s such a unique new family show.

According to TV Guide, Nick’s scheming is at the center of everything she does as viewers try to figure out who she really is and what she wants with the family. It’s kind of the perfect mystery comedy/drama to watch with your kids while you try to figure out the truth together. But, you know, without all of the language, gore, and nudity that can be found on more adult-oriented shows.

Melissa Joan Hart, who plays the mom in No Good Nick, recently told Access Hollywood that it’s a family show with a unique spin. "It does have a lot of dark stuff happening," she admitted. "They’re saying it’s like Scandal for kids." She described the show as a "serialized family mystery dramedy." It’s not your typical family sitcom that you can watch as you see fit or even out of order. No Good Nick might be your kid’s first glimpse at what it means to marathon watch a TV show that has tons of layers that need to be peeled back during and after every episode.

All 10 episodes will drop on Netflix on April 15, but Hart said there are so many different Easter eggs sprinkled in throughout those 10 episodes that families can watch it back again and find what they might have missed the first time around. It doesn't seem like it has any elements that will scare or confuse children over the age of nine, but because of the mystery aspect of the show, you’ll probably want to watch it with your kids to make sure they can handle it.

As with any TV show, all kids are different. What one 10 year old can handle in terms of maturity, others might not be able to. Use your own discretion with No Good Nick, but since it is rated TV-PG, chances are, the whole family can enjoy it and uncover the mystery together.