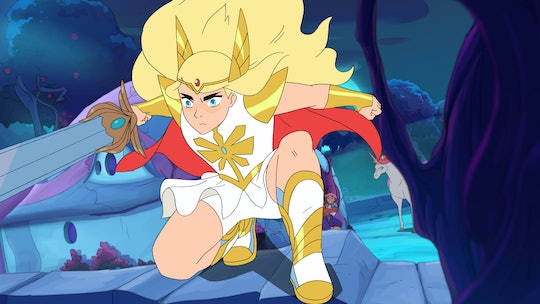 Last year, Netflix showed that it is capable of bringing back the nostalgia of Saturday morning cartoons with She-Ra and The Princesses Of Power. The animated series focuses on She-Ra, He-Man’s sister who is just as powerful as he is and has her own band of powerful adventurers. But because it can be hard to figure out how appropriate a fantasy cartoon is for kids, parents are going to be curious about what ages should watch She-Ra and The Princesses Of Power.

According to Netflix, its official rating is TV-Y7-FV, which means that it is technically most appropriate for children ages seven and up and contains some fantasy violence. There’s no rule that says your six or even five year old can't handle the show, but the rating means that She-Ra and The Princesses Of Power is meant for children who know how to distinguish between reality and fantasy. The fantasy violence is likely very mild, but ultimately it’s up to parents to decide if their children can handle it on this particular show.

There are some giant alien creatures and explosions which might frighten younger viewers, so this might not be the best cartoon for toddlers, but it seems suitable for kids who can handle the animated fight scenes and weaponry.

Despite containing fantasy violence that kids ages seven and up might appreciate more than others, She-Ra and The Princesses Of Power does have a strong and important message for younger viewers to take in. The series focuses on good and evil. She-Ra, who at first fights alongside the bad guys and girls, soon realizes that being good is right and that message is a positive one for young viewers.

She-Ra and The Princesses Of Power also shows kids a fierce, brave, and noble hero in the form of a female role model. Some of She-Ra’s friends are male and others female, but together they work as equals for the greater good. This is a positive message for kids of any age, so if some parents think their younger children can handle the show, it is totally up to them to decide what’s best for their child.

The cartoon teaches kids about integrity and what it means to not only be a hero, but also stand up for friends. It doesn't teach kids lessons in the same blatant way as toddler series like Paw Patrol or Sesame Street, which is why it’s targeted toward older children rather than preschool aged. But kids a tad younger than seven could still likely understand and appreciate She-Ra and The Princesses Of Power.

Kids who have reviewed the show on CommonSenseMedia.org wrote that the cartoon violence isn't scary and another compared it to Teenage Mutant Ninja Turtles and ThunderCats. These reviewers wrote that they not only enjoy it as 13 and 14 year olds, but that younger siblings as little as five years old also like She-Ra and The Princesses Of Power. When it comes down to it, figuring out what ages should watch She-Ra and The Princesses Of Power really depends on how parents feel and what they think their children can handle, regardless of how old they are.

Preschool aged kids probably aren't ready for the slightly complex lessons of She-Ra and The Princesses Of Power, but if you have kids as young as five and know them to have an interest in these kinds of animated series already, then chances are, they will do fine with this one. And since young teens seem to enjoy it too, She-Ra and The Princesses Of Power is legitimately enjoyable for the whole family.

More Like This
'Workin’ Moms' Season 7 Is Reportedly In The Works! Here’s Everything We Know
'Squid Game' Is Coming Back For Season 2 On Netflix: Here’s What Parents Need To Know
Exclusive: Three Siblings With Super Powers Protect National Parks In Spirit Rangers
The Office Halloween Episodes: A Definitive Ranking