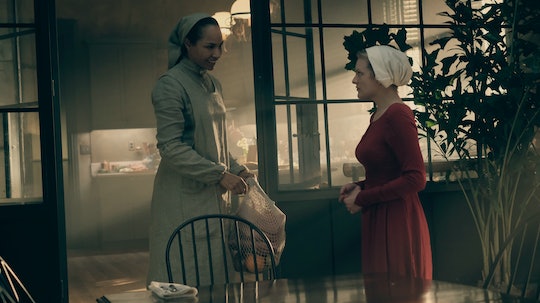 Women Are Separated Into Groups On 'The Handmaid's Tale'

When Hulu premieres The Handmaid’s Tale on April 26, it’s either going to be the worst time or the best time to have it available. In the fictional society of Gilead — a future dystopian version of America — the women are divided in many ways. Among the groups, are the women in green, otherwise known as the Marthas. But what are Marthas on The Handmaid's Tale?

Even in today's society, the clothes women wear can often be met with judgments by men or other women. People have a tendency to make assumptions based on outward appearances. But in the case of Gilead, the whole purpose of women's clothing is to place labels on them for all to see. These different colors showcase their main purpose in life. In the book of The Handmaid’s Tale, The Marthas are dressed in green to set them apart from the Handmaids who are in all red. Meanwhile, the influential and powerful women (well as powerful as any woman can get in this regime) all wear blue, and the “Aunts” don the color gray.

The Marthas are the cooks and servants of Gilead and what they offer to their society is their ability to do that and nothing more. Since the Handmaids are the only fertile women and the Aunts are there to train the handmaids, the other women are assigned their titles by what they have to offer.

The concept for The Handmaid’s Tale comes from the 1985 novel of the same name, but even though it was written over 30 years ago, it’s sadly more relevant now than ever before. Being demeaned by men or controlled by them isn’t anything new, but the world that’s presented on The Handmaid's Tale, which is still modern enough to seem not too far off, is much scarier because of that fact.

The Marthas of The Handmaid’s Tale are sentenced to lives of servitude for their remaining years. And if they don't like the life they've been given, well, then that's just too bad. Any resistance from anyone will get you sent to the Colonies, where you are forced to work around toxic waste and die within a few years. So it's either accept the position you've been assigned or face the severe consequences. No matter how you look at it, the Marthas — like most of the other women of Gilead — have a pretty terrible deal.