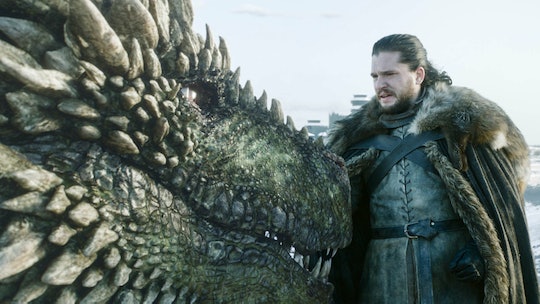 Daenerys' Dragons On 'Game Of Thrones' Have Meaningful Names

Daenerys goes by many names on Game of Thrones, but Mother of Dragons might be her most popular (and easiest to remember). The Targaryens have been known for raising dragons for centuries and when she was gifted three dragon eggs at the start of the series, Daenerys vowed to raise them if they hatched. Now she has only three left, but what are the names of Daenerys’ dragons on Game of Thrones? Although technically one of them now belongs to the Night King as an undead ice dragon, Daenerys named all of her dragon children after important men in her life.

Daenerys’ arguably favorite dragon who viewers see her ride more often than not is Drogon. He was named after Drogo, Daenerys’ Dothraki husband who succumbed to a battle wound infection in Season 1. It makes sense that Daenerys is closest to this particular dragon, but she can essentially control both of the currently living dragons.

Her other living dragon is Rhaegal. He was named after Daenerys’ older brother Rhaegar, who was also Jon's birth father. Although Daenerys was just a baby when Robert killed Rhaegar, Daenerys grew up hearing stories about her family who once ruled Westeros.

Viserion is Daenerys’ third dragon who was speared by the Night King last season. Afterwards, the Night King turned Viserion into a White Walker dragon, which proved to be a lethal combination when Viserion took down a portion of The Wall. Viserion is named after Daenerys’ other brother, Viserys. Game of Thrones viewers met him back in Season 1 and got to see his cruelty toward his sister before Drogo poured a pot of molten gold over his head.

It's still unclear if Daenerys will have any pull with Viserion when she sees him again, but right now she has just two dragons under her control. Before Daenerys’ eggs hatched, there hadn't been any dragons in the world for several generations. The last full grown dragons in the Targaryen family had helped her ancestors unify Westeros and begin their rule over the seven kingdoms.

After that, any dragons born only grew to be around the size of an average cat. Last season, Daenerys, Jon, and their advisers met with Cersei in the old Dragon Pits of King's Landing. There, it was explained that the monument built to house and contain Targaryen dragons had actually stifled their growth.

Daenerys’ dragon eggs weren't even expected to hatch. When they were given to her as a gift after her wedding to Drogo, it was established that they were essentially fossilized dragon eggs and meant as a symbol of Targaryen support. No one expected the eggs to actually hatch and after that, no one expected all three to grow to full-sized dragons capable of mass destruction.

Although all three of Daenerys’ dragons were named after men, there have been fan theories that either one of then is a female or that male dragons can somehow lay their own eggs. This would mean that by the end of Game of Thrones Season 8, there could be new dragon eggs ready to hatch. As far as viewers know, the only way to hatch a dragon egg is through some kind of blood magic and fire, but there could be other ways that have not yet been introduced on the show.

Until recently, only Daenerys had ever ridden on a dragon solo, but Rhaegal allowed Jon to ride him in the Season 8 premiere, proving that Daenerys isn't the only dragon rider in the family. If Jon learns how to control the dragon, there's a good chance that he might ride him into battle in the wars to come this season. Let's just hope that they don't lose another dragon to the Night King, because right now, they definitely can't afford that.