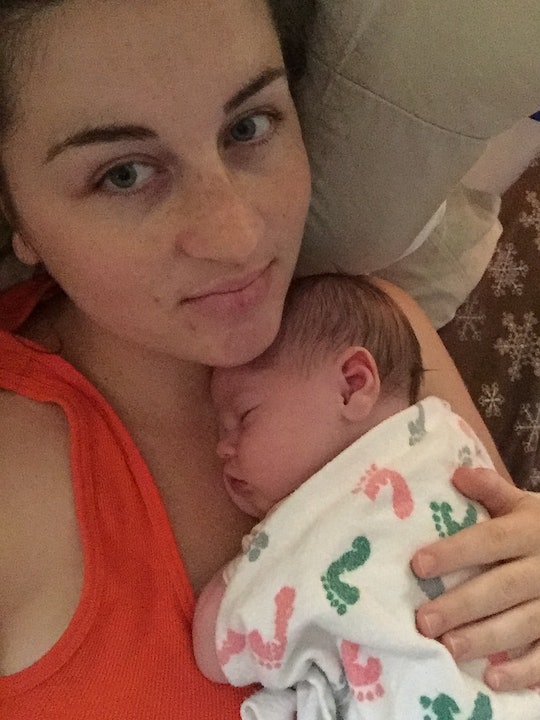 I naively thought that my breastfeeding experience would be similar to the women in the birthing class videos. I had this grand idea in my head that there would be quiet Yogi music playing as the late morning light shined on us all through the hospital window, and my baby, who was resting peacefully and quietly on my chest, would slowly begin rooting his way over to latch perfectly onto my nipple and start eating for the perfect amount of time. Well, in a surprise to absolutely no one, my breastfeeding experience was the total opposite of what I'd planned.

My son was born at 3 a.m., so naturally, I had to feed him at 3:25 a.m. And when the time came to feed, my nurse jammed him onto my boob, putting me in the most awkward position of my life. He latched and I looked at her with glee. I'd done it! But then she looked at me and said, “No, his mouth isn’t right," and unlatched him. I could’ve had a heart attack. She said, “you need to stimulate your nipple so it will come out more." It was the beginning of my hellish saga of learning to breastfeed with short nipples.

I couldn't describe to anyone the feeling of failure I felt as the nurses in the hospital treated me like I just wasn’t trying hard enough to get my son to latch or latch correctly. They kept trying to make me do the football hold, which, in my personal opinion, is the worst. I had three separate nurses and my ex, who was in the hospital room after our son's birth, tell me I needed to extract my nipple more. I wanted to scream at them that I was trying, and that it hurt like hell, and that I just couldn't get my nipple to come out any further. But no one believed me. One nurse had the audacity to show me pictures of how my nipple should look. I jumped at the chance to see the lactation specialist as fast as I could, but she only made things worse. Like the nurses and my ex had, she reiterated how important it was to "extract [my] nipple more," and then she made me pull my son’s head inward, which felt like the most unnatural and painful position ever.

By the time we were ready to go home, my nipples were cracked and bleeding, and I was tired of hearing over and over again how I was doing it wrong.

It meant a lot to me to be able to breastfeed, and it was something I made clear to all of the doctors and nurses both before, during, and after delivery, so I didn't really understand why no one stepped in to help me.

After we were home and settled, I was determined keep breastfeeding. It was painful and we were unsuccessful a majority of the time. So I started pumping instead, which helped me express my nipple more, and I even get a little milk out to tide my baby over, but I was a mess. When we had our three-day color checkup, the pediatrician asked how breastfeeding was going. I admitted to her I was having a serious issue getting him to successfully latch. Without hesitation, she suggested a nipple shield, which she kindly let me have for free. And if you haven’t used a nipple shield, it’s basically like a rubbery nipple cover with holes that help to fully extract the nipple to help baby begin feeding. This thing was a God send.

Finally, my baby was latching and staying latched, eating for a full 15 minutes on each breast. I could've kissed that pediatrician. I felt confused as to why no one else in that hospital had even suggested that as a solution. Instead, they insisted that I was doing something wrong or that I wasn't trying hard enough — two things that couldn't have been further from the truth. It meant a lot to me to be able to breastfeed, and it was something I made clear to all of the doctors and nurses both before, during, and after delivery, so I didn't really understand why no one stepped in to help me.

Breastfeeding just wasn't worth it to me. We could bond without the boob.

Because of my short nipples, my nipple shield wasn’t as temporary of a helper as I thought it would be. I became very dependent on it because it just made breastfeeding my son so much easier. Using the shield meant that I had to pump before I went out anywhere, because using the nipple shield while I was out was too difficult. It usually was knocked off a few times before my son successfully made contact. And I knew that my short nipples were virtually useless by themselves, so that made things even more of a challenge: If I was going to breastfeed, I needed the shield at all times. Before we even left the house I'd have to be sure to pump enough for a couple of bottles, or be prepared to breastfeed with the nipple shield in the car. It got a little exhausting.

When my son turned 3 months old, I was done. Even though utilizing the shield made my experience more convenient, it still wasn't easy. I was often frustrated, irritated with constantly pumping, or in pain because my breasts were more sensitive than ever. After reading more into it, I feel I might have experienced breastfeeding agitation, as the process of building a breastfeeding relationship with my son was often emotionally and physically draining. When I caught a cold my supply started to deplete, and honestly, I was OK with letting that happen. I didn't want to continue to breastfeed my child if it was having such a huge effect on me emotionally. And while I was frustrated, I realized breastfeeding just wasn't worth it to me. We could bond without the boob.

I’m glad that I did try as long and hard as I did to give my son breast milk, but I was definitely not one of those women breastfeeding came easily to. Honestly, it was a trying experience for me from the moment he was born. From the first time his nurses jammed him onto my breast, to the first time we used nipple shield, to the constant pumping, I was exhausted. Failure doesn't come easily to me, and often times with breastfeeding I felt I was failing. If I'm being honest, I was happy to give it up. Formula feeding was just as beneficial for my baby as it was for me.