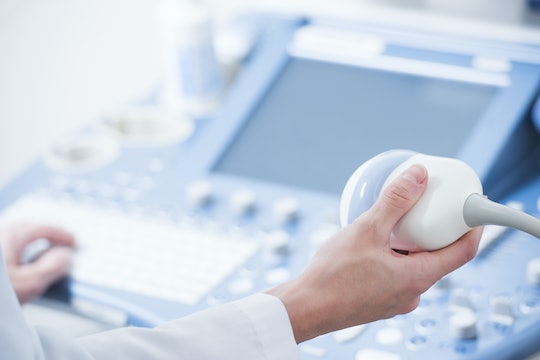 Before Ultrasounds, Here's How Doctors Checked In On Growing Babies

My favorite thing about pregnancy (other than the kicks and wiggles I feel) is the ultrasounds. It’s the most surreal, weird, and wonderful thing in the universe to see your baby on the screen. So many emotions and all the feels. I also feel so fortunate to be pregnant during a time when modern medicine is pretty stellar, and we can use things like ultrasounds and other technological advancements to make sure mom and baby are healthy as can be. I mean, what did doctors use before ultrasounds? I feel like there would be a lot of unknowns back then, and that would be pretty scary and stressful.

More Like This
Is The Covid Vaccine Safe For Pregnant People?
A Guide To Trying To Conceive & The COVID-19 Vaccine
Can You Sunbathe During Pregnancy?
30 Fun Father's Day Gifts For A Dad-To-Be

Dr. Daniel Roshan, a New York-based high-risk maternal fetal medicine OB-GYN tells Romper that while doctors didn't have ultrasounds, they did have some options. “Doctors only had fetal dopplers and a stethoscope to listen to baby's heart, and they used a tape measure to measure the fundal height and make sure the baby was growing. As you can imagine, without directly seeing fetal anatomy and measuring the baby size, things were very limited.” Yikes.

And as a high-risk OB-GYN, Roshan definitely relies on ultrasound technology quite heavily. “With sonogram we could check fetal anatomy, locate placenta and its anomalies, measure fetal growth accurately, check fetal wellbeing, check umbilical artery blood flow, evaluate amniotic fluid, and more. Without ultrasounds we can’t asses any of the above accurately. We also use sonogram to guide fetal procedures,” he explains. So before this awesome technology, it looks like all doctors and other prenatal team members could do was listen for the heartbeat and make sure baby is growing — and hope for the best.

When did ultrasounds become a thing and the “norm” for modern prenatal care? The machine as we know it today came about in 1956, another Romper article reported, and it was all thanks to obstetrician Ian Donald and engineer Tom Brown. They came up with this prototype based on “an instrument used to detect industrial flaws in ships,” according to LiveScience. However, using an ultrasound didn’t become mainstream until the end of the 20th century. It wasn’t popular in the United States until the late ‘70s either, which isn't very long ago. How mind blowing is that?

The ultrasound technology is perfect for checking on your unborn baby because it’s safe and completely non-invasive. (Except for when they use that huge vaginal wand — I feel like that’s kinda invasive. But of course it doesn’t hurt your baby, it’s just uncomfortable for you.) According to How Stuff Works, the ultrasound works by using sound waves. As they travel through your body at a high frequency, they hit your bones and other tissues, which make a reflected wave, creating a two-dimensional image.

Thank god for modern technology, where doctors can monitor your baby throughout your entire pregnancy and hopefully catch things before they become too serious. I think it would be extremely stressful to be pregnant and not know what’s going on in there at all. Whether your baby's growing properly, has enough amniotic fluid, if they’re breech, if there’s a genetic issue, you name it, knowing that stuff's important. Maybe that would be OK to be none the wiser for some people, but I know with my personality, that would be a no go.

I was hooked on monitoring and seeing my baby from the very first ultrasound. Seeing that tiny flashing light, and the doctor informing me it was a strong heartbeat, was magic. Thankfully, the ultrasound is a completely safe and non-invasive way to check in on the little bean, but it's even more fun to see what they look like and to print out the pictures. It's bad enough that our grandparents couldn't tell if their baby was breech or not, but they didn't even get any pictures for the scrapbook.