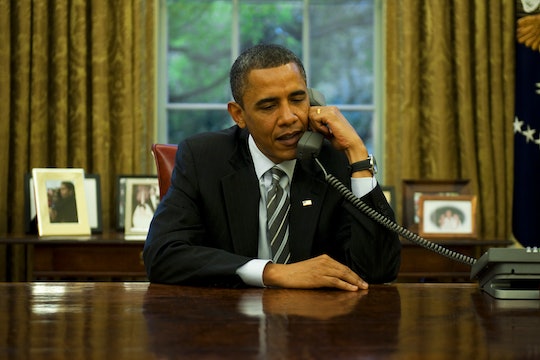 About That Trump & Obama Phone Call...

Everyone has those friends or family members that they just have to check in with now and again over the phone. Sunday calls from the kids to grandparents, nightly check-ins with co-parents — we all know the drill. Apparently, even the most powerful human beings aren't immune to this obligatory ritual. On Wednesday, Donald Trump and President Obama talked on the phone, which would lead any sane human being to wonder: What in the name of the Great Lakes did they talk about?

Because we all know that Obama and Trump are not exactly BFFs. Following a cordial meeting in November just after the election, the two seemed to shrug off any additional public meetings. But today the president-elect was privy to a call from Obama regarding veteran's affairs. Trump told USA Today after meeting with a group of healthcare professionals that the president called him. "He phoned me — we had a very nice conversation," the president-elect said.

"We had a general conversation," Trump told reporters from his estate at Mar-a-Lago in Florida. Oh, to be on a '90s-style three-way mute during that call. Because it might not have been all that friendly.

Earlier on Wednesday, the president-elect Tweeted, "Doing my best to disregard the many inflammatory President O statements and roadblocks. Thought it was going to be a smooth transition - NOT."

On second thought, when one party puts it that way, who needs three-way mute options on a portable phone? (Bonus: The president-elect basically used Cher Horowitz vocabulary to describe the conversation he had with Obama.)

Obama might have checked in to see how the transition was going and make sure everything was going to be OK. Rightly so, since the Obama administration has taken some major steps in the past few weeks to fortify his legacy, in direct opposition to the incoming administration's plans. In calling Trump, Obama might have wanted to smooth some things over.

While the Obama administration attempts to make nice, Trump is intent on making sure the entire world knows his plans, which are in direct opposition to his predecessor. Trump even weighed in, via Twitter, about one of the most divisive foreign policy issues: the United States' relationship with the United Nations. Trump tweeted after the United States abstained from a vote concerning Israeli settlements, "The beginning of the end was the horrible Iran deal, and now this (U.N. vote)! Stay strong Israel, January 20th is fast approaching!"

All of Trump's thoughts are arguably worth hearing out. The president-elect's decision to Tweet those very divisive policy points while there is another sitting president is odd, if only because it demonstrates a lack of understanding about how intricate foreign policy can be and how reliant diplomacy is on longstanding relationships. And it's also bad manners — how would you like it if you were retiring and the new person started sending out directives to your team? It's office politics, at the most banal level. More importantly, though, love him or hate him, Trump's Tweets portray his plans for the government and the country going forward — and even if he's only half-serious about carrying his grudges or feuds forward into the new administration, everyone should at least be aware.

Let's hope that the phone call between Obama and Trump was, indeed, friendly and didn't devolve into someone asking the Secret Service to please hang up while they talked about something super-secret like what windows they can sneak a cigarette out of and whether the water pressure is better in the Lincoln bedroom or somewhere else. Because otherwise, these two men have nothing else in common.