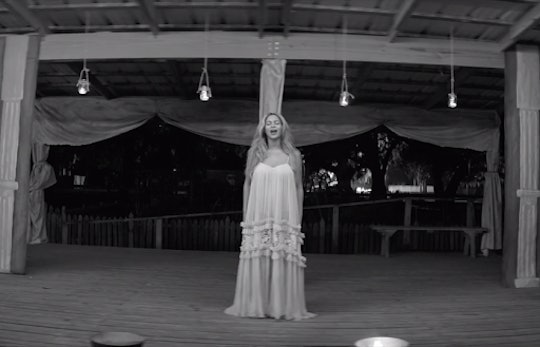 What Do Beyonce's 'Freedom' Lyrics Mean? The Song Makes A Powerful Statement

Beyoncé is in control. That may be the understatement of the year, but it's still true. She's built an empire, cultivated her public persona as the most influential superstar of a generation, and literally invented the surprise visual album. She's graced us with two of them so far, following up on the success of 2013's Beyoncé with the unveiling of Lemonade on HBO Saturday night. But while Beyoncé tracks like "Blow," "Flawless," and "Rocket" showcased her prowess as a performer, her strength, and her sensuality, Lemonade does all that and more. Perhaps most notably, in the overtly political track "Freedom," Bey, along with rapper Kendrick Lamar, show listeners that they can be the architects of their own happiness, but beyond that, what exactly do Beyoncé's "Freedom" lyrics mean?

Before Lemonade aired, it was no secret that Bey sought to use her considerable clout to sway the national conversation on issues that matter to her, especially after the February release of the single "Formation," a searing indictment of police brutality and a nod to the Black Lives Matter movement. 2016 is famously the year that the public really realized that Beyoncé is black, and many are calling "Freedom" an anthem for African American empowerment.

"Freedom" is a collaboration between Beyoncé and rapper Kendrick Lamar, who is similarly politically astute. Throughout the song, the two take on systemic racism and injustices dating all the way to slavery in the United States.

In his verse, Lamar raps about the essence of interactions with police for black men:

Seven misleadin' statements 'bout my persona/Six headlights wavin' in my direction/Five-O askin' me what's in my possession/Yeah I keep runnin', jump in the aqueducts

Earlier in Lemonade, the mothers of black men recently killed by police hold pictures of their sons — among them Eric Garner and Michael Brown — as the naked anguish in their eyes pierces the camera.

Throughout "Freedom," though, Beyoncé's message seems to remain clear: We will overcome, and freedom from oppression and social ills like racism is within reach. She calls for perseverance and solidarity, and appears to establish herself as a leader for the cause.

Hey! I'ma keep running/Cause a winner don't quit on themselves

I'ma riot, I'ma riot through your borders/Call me bulletproof

But the real theme of the song, and probably the most relatable, are the Bey-typical promises of self-reliance, because she's awesome.

"Freedom" is a triumph for many reasons, but the fact that it takes a strong stance, encourages action, and aims to prompt people to take control of their futures is incredibly powerful. Nestled within a visual album that had the internet speculating about whether Beyoncé would divorce the her husband, Jay Z, for cheating but ended with him quite literally groveling at her feet, "Freedom" shows that Beyoncé is so successful for a reason. And that she can make even the worst situation into a victory.

The song ends with Hattie White's simple and so, so effective message:

I had my ups and downs, but I always find the inner strength to cool myself off. I was served lemons, but I made lemonade.