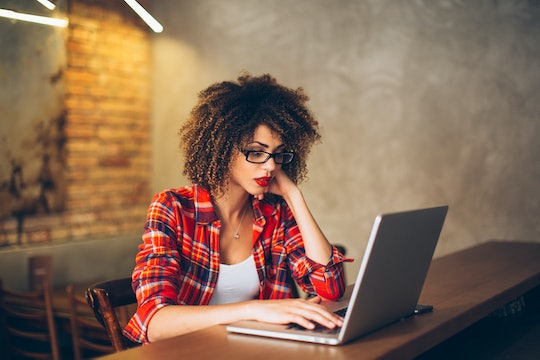 All Of Those TTC Message Board Acronyms Explained, According To An Expert

If you’re in a trying to conceive (TTC) community online, you’ll find camaraderie, support, advice, and a whole lot of acronyms. When you’re reading through the posts and comments, sometimes all these letters being thrown around start to look like alphabet soup, and you don’t even know what you’re reading. So what do the TTC message board acronyms mean? It seems like it’s another language and honestly, any list isn't going to be definitive. I’m sure there will be more acronyms created as more and more women begin to use these groups while TTC, and more circumstances arise. Remember, some acronyms differ depending on which group you’re in, because apparently, online communities like to make things complicated.

But this list should be pretty helpful and get you off to a confident start. It's comprised from a list posted in a TTC group on Facebook (which I am in) by Shianne Shampo, who is a group administrator and has been compiling a term list throughout her time spent using TTC groups, and twoweekwait.com.

The most common things women talk about in the TTC forums, in my experience, are tracking their symptoms, their fertile window, tracking and discussing ovulation, and testing for ovulation and pregnancy.

Because sometimes saying husband, partner, spouse, etc., takes too much time, which could be spent BDing. See what I did there?

The use of these acronyms are really understandable to me, because some of these medical terms are super long and hard to spell — and nobody wants to look like they are a bad speller. (Maybe that’s just me?)

But seriously, what's with all these acronyms? According to Julia Wang, head of digital content for The Bump, using acronyms in a community forum is a way to show to others in the group you're "one of them," and you speak their language. "In subconscious ways, using the right acronyms creates a strong affinity with your peers. It's no different from when you visit a different country and are learning to speak the host country's language. Immediately you have a point of common ground," she tells Romper in an email interview. And in mom/TTC community boards, Wang says that common ground is no different.

As for how awesome TTC groups can be for women, Shampo (who compiled an acronym list) tells Romper she loves TTC groups because they are "a nice place to get some opinion-based things, facts, and even old wives' tales. It's such a great mix of information and support."

Shampo is right. In my experience, these TTC groups are so supportive and encouraging during what can be a very stressful, but exciting time in your life. Even the use of acronyms can build a community vibe, because it's almost like your own secret code language that only women are in tune to. If you're looking for your BFP, I wish you lots of "baby dust," as they also say in the groups. And if you aren't currently in a TTC group, I highly recommend it. They definitely help you feel like you're not alone in your journey.