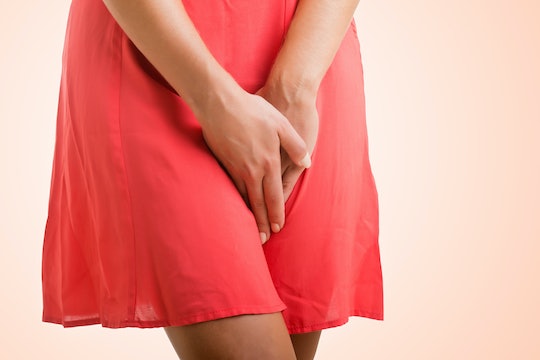 It’s that time again to talk about every woman’s favorite body fluid when it comes to trying to conceive (TTC) — cervical mucus (CM). As you know, it’s important to track your CM during your cycles because the amount, color, and consistency can give you clues as to where you are in your cycle, whether you’re just coming off your period, to when you’re ovulating, to when you’re pregnant, or about to start your period. If you’re timing intercourse by checking your CM to see when you’re ovulating, you may be wondering, what does cervical mucus look like after ovulation?

Why is CM so important when TTC? Its consistency and amount determines whether or not you’re about to ovulate and drop that precious egg, and it also helps the sperm to get to where they need to go. If your CM is too thick, creamy or sticky, it’s harder for the sperm to swim up through your cervix and into the egg. That’s why the perfect CM for conception is clear and stretchy, because it makes it slippery enough for the sperm to have an easier time getting to where they need to go. According to the American Pregnancy Association (APA), many women may have “hostile” CM and not even know it. What makes CM “hostile”? It's "thick and sticky, instead of thin and stretchy around ovulation,” the APA noted.

If you’re timing intercourse during your fertile period, this typically means having sex multiple times in a row (or every other day) for a week. And for some ladies, they love it and can do it — and more power to y’all. For me personally, my lady parts and I need a break. Not to mention my husband needs a break. When it gets to the point where he asks, “Do we have to do it again tonight or is it safe to have a rest night” because he is also too sore to move, that’s when you know it’s been a lot. There’s only so many ways to make sex fun and exciting and romantic when you’re on day five of intercourse. And yes, it becomes “intercourse” and not “sex” or “making love” on day five. So what should your CM look like once you’re done ovulating, so you know you’re not totally missing your chances by taking a break from the bedroom, and how can you be 100 percent sure?

The timeline of CM is an important factor to determining exactly when you can stop doing the deed for a bit. Directly after your period stops, you should no longer have any type of CM for three or four days, according to Dr. Adrienne Zertuche, an OB-GYN at a division of Atlanta Women’s Healthcare Specialists. Following that time period, you may have a small amount of cloudy and sticky mucus for three to five days. And again, if you’re in your ovulation period, your CM should be abundant, clear and stretchy, like egg-whites, according to Zertuche. “And it should be that way for the three to four days immediately before, during, and after ovulation.”

How can you know when you’re officially not fertile anymore and it’s time for the two week wait? Zertuche says, “After ovulation, most women return to not having cervical secretions for the remainder of their cycle.”

So unless you have some other issues going on, like a yeast infection or a potential pregnancy, most women don’t have any type of “secretion” once their fertile period is over. There’s some debate over whether or not you have different CM if you’re pregnant as opposed to when you’re about to start your period, but that’s a different story for a different day. Rest assured if you’re no longer secreting any fluids from your lady parts, it’s probably safe to stop having sex for the moment and give you and your partner a much needed rest. And welcome to the two week wait — the longest two weeks ever, if you’re TTC. Soon you’ll know if you’ve conceived.