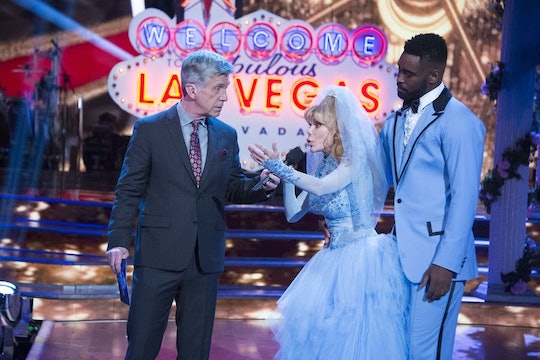 Charo Has A Lot To Say About Her Time On 'DWTS'

Knowing Charo, as so many of us now feel we do, she isn't the type to stay quiet for long, and since she was eliminated pretty early in the competition, a lot of fans are likely wondering what Charo thinks of Dancing With the Stars. On the one hand, you kind of expect the "cuchi-cuchi" dancer to sound off about any unfair scores she may have received while she was on the show or about her supposed feud with judge Bruno. But, surprisingly, Charo has been very cavalier about the whole thing. In fact, when she spoke to E! News directly following her elimination after her Week 3 performance with partner Keo, she seemed grateful to have competed at all.

"I made a beautiful friend and I got connected with Keo," she said. "This is not a job, this is an incredible experience and I recommend this to everybody." Charo went on to say that even though she and Keo were eliminated early on DWTS, "This is a victory. In my mind, in my heart, in the way we think, it’s a victory." Even though her time with DWTS has ended, Charo said that she can now go back to Vegas to perform and go on tour once again. So despite being booted off much too early for all of the Charo fans, old and new, she seems to be dealing with the elimination just fine.

While Charo was on the show, she got involved in a feud of sorts with Bruno, during which he would tease her about her moves or her accent and she would serve it right back at him. To some viewers, it was a question of whether or not the feud was legitimate or just for the cameras. Nothing major came from the two, who seemed to joke about having it out for each other — and if it really was something explosive, chances are, it would've come out in full force by now. But Charo appears to be in total support of DWTS even though she’s no longer a part of it for Season 24.

When Charo and Keo appeared on Good Morning America shortly after their elimination, Charo once again had nothing but positive things to say about the show. But this time, she made it a point to say how important the professional dancers, the wardrobe stylists, and everyone else behind the scenes make the show what it is. And you have to love her for giving that recognition.

With her upcoming shows, I don’t know how the super active performer is going to fit in time to actually sit down and watch DWTS, but Charo has made it pretty clear that she holds no ill will toward anyone and that she’s more than grateful for the experience it allowed her.