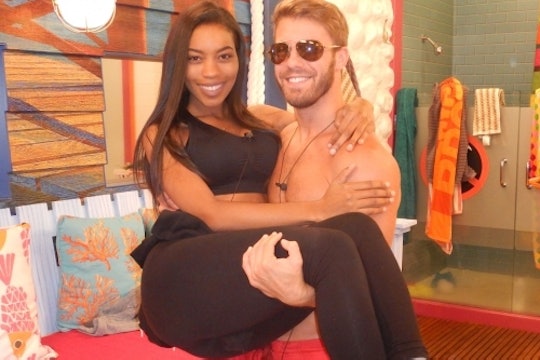 What Does Cody Calafiore Think Of Zaulie On 'Big Brother'? He Doesn't Support Showmances

By now, Big Brother fans everywhere are likely heavily shipping a Paulie and Zakiyah showmance, even going so far as to name the coupling Zaulie. But, unsurprisingly, there is always the chance that getting into a showmance on Big Brother will result in getting into a distraction from that $500,000 prize they're all shooting for. And since Paulie's brother is a veteran himself, what does Cody Califiore think of Zaulie on Big Brother 18? Obviously he can't give his brother advice while he's on the show and in the thick of it, so all he can do is watch and speculate like the rest of us. And while Cody is all for Paulie finding love in the Big Brother house, he is not down with what this could potentially mean for Paulie's shot at winning the game in the end.

During Cody's season of Big Brother, he wasn't entangled in any epic showmance to distract him from the whole reason he was there in the first place. Now, did that allow him to go home with the $500,000 prize money? No, it did not, but we have to believe that Cody's concern over his brother's motives in the house come from a genuine place. And the fact that he can still recognize Zaulie for the adorable pair they are shows that his insistence of Paulie not getting involved with anyone has nothing to do with Zakiyah herself.

Cody Califiore's thoughts on Zaulie are all about wanting his brother to keep his head in the game, as he even says in the video above that Paulie and Zakiyah should be together outside of the house, in real life, after the $500,000 prize money is won and they aren't competing any longer. Which, OK, is kind of a good point. But then you see the cuteness between Zaulie and you're just like, "nah, proceed."

In reply to a tweet that has since been taken down seems to have insinuated that Cody's dislike over Paulie getting into a showmance had to do with race, but Cody was quick to squash that rude claim right away. He already admitted to the adorableness that is Zaulie and that he's seen every sweet moment we have, so let's just not.

Just because Cody Califiore doesn't support showmances as a whole, it doesn't mean that he won't support Zaulie when Big Brother is no longer involved. As Cody said, "Be in love with her after the show, date her in September." So, does Cody approve of Paulie and Zakiyah getting into a showmance on Big Brother 18? For all intents and purposes, yes, but as far as that Big Brother prize is concerned, he wants it for his brother, and rightfully so.