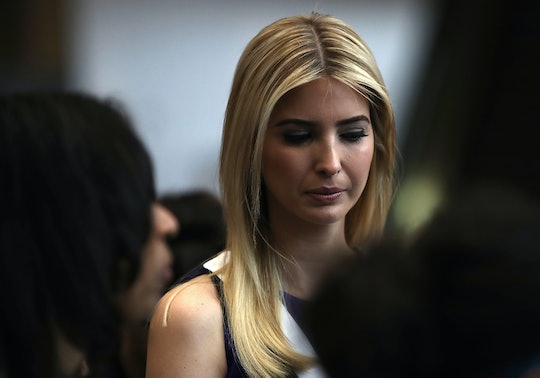 Just in case there was any doubt, the word "complicit" means taking part in something wrong or illegal. In that sense, when Ivanka Trump says that she's not complicit in her father's presidency, she's correct (not to mention wisely protecting her own image). But it's still interesting that, during an interview with CBS This Morning, she played like she was confused about the term and that claims that she was related to any actions on the president's part were silly and trivial.

It's important to note that, as far as we know, there's nothing illegal about her father's presidency, and the word "wrong" is a bit subjective (at least these days it is). Given her public statements, Ivanka actually believes that her father is doing something good for the country. In any technical sense of the word, since "wrong" or "illegal" is still up in the air when it comes to her father's activities, she's right. She's not "complicit" in anything.

President Donald Trump trusts Ivanka's judgment and smarts enough that he's given her an office in the White House and touted her good counseling on more than one occasion. With that in mind, let's not be fooled by her clever redirection.

Ivanka went to the University of Pennsylvania. She's a very smart woman. She knows what the word "complicit" means, even when it's used in an unorthodox way, or in passing conversation about activity that isn't necessarily "criminal" in nature. That's why it's hard to hear her play dumb about the attacks on her father.

Ivanka knows why some voters don't like her father, yet she shrugs off any criticisms that she's helped prop up his divisive and often shocking behavior by suggesting the word "complicit," as used in this sense, was bewildering somehow. As she told Gayle King on CBS This Morning:

If being complicit is wanting to be a force for good and to make a positive impact, then I’m complicit. I don’t know that the critics who may say that of me, if they found themselves in this very unique and unprecedented situation that I am now in, would do any differently than I am doing. So I hope to make a positive impact. I don’t know what it means to be complicit, but you know, I hope time will prove that I have done a good job and much more importantly that my father’s administration is the success that I know it will be.

Don't be fooled here. Ivanka Trump understands what an interviewer means when they ask why she doesn't speak up more for women in her father's administration. She's a mom, so it's hard to watch her look on silently while her father cuts the budget for programs that allow low-income women and families access benefits to feed their families.

She's a college-educated woman, so it's tough to imagine her really understanding what it means to "put America first" when it comes to domestic policy and watching her father promise to bring jobs back to America that she, as a well-educated businesswoman, knows might not come back.

She's a woman, so in general, it's hard to watch her have such a knee-jerk reaction to the sexual assault allegations against her father without at least using the moment to talk about how those issues plague women across the country as well. She's his daughter, I get it, but it might have been better PR to come out full-force against them, rather than to shrink away to save face.

In taking an office in the White House and defending her dad, Ivanka Trump is vouching for her dad and, in turn, the decisions he makes, or the actions for which he may be criticized. So fine, Ivanka isn't "complicit." She's just accepting all of it.